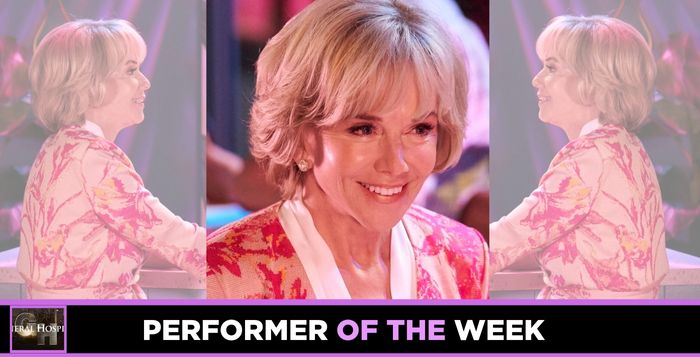 Soap Hub Performer Of The Week For GH: Linda Purl

Linda Purl is no stranger to the soap opera world. In fact, her first TV credit is listed as Doreen Post on The Secret Storm. Soap Hub isn’t letting her return to daytime, as General Hospital’s Peyton Honeycutt, go unrewarded, which is why we’re bestowing Performer of the Week for GH honors upon the TV veteran.

Linda Purl – Performer of the Week

Purl’s Peyton introduced herself to Carly Corinthos (Laura Wright) at a hotel restaurant when fate stranded her in Jacksonville, Florida. The two women got off to a cordial start but it wasn’t long before Peyton and Carly learned that they had much in common and the warm polite tone between them turned frosty and combative.

Carly shared with Peyton that she’d once spent time in Jacksonville. Peyton was happy to share that the city had improved greatly over the years. Next, Peyton spied on the husband of a friend of hers only he was with a much younger woman. She went to the worst possible scenario and assumed that the woman was being used by her friend’s husband. A quizzical Carly wasn’t sure how much could be inferred from a small amount of information.

Peyton and Carly were at odds over what each of them had witnessed. Seeing her husband’s pal with another woman served as a catalyst for Peyton’s highly refined nature and judgmental tone, which Purl captured beautifully, to surface. Peyton insisted that solicitation and sex trade weren’t doing Jacksonville any good. She prided herself on contributing to the razing of the late Ruby Anderson’s (Norma Connolly) home where Ruby’s niece Bobbie Spencer (Jacklyn Zeman) had once worked as a “lady of the evening.” (Trivia note: Purl starred in the ABC TV Movie Little Ladies of the Night, a movie about teen prostitution, which had over 26 million viewers in 1977.)

After Carly informed Peyton that Ruby was her great aunt, Peyton’s back went up against the wall. But she didn’t bolt from the table. Rather, she stayed and held her own against Carly. “Were you employed at her establishment?” Peyton inquired.

“There are such things as standards,” Peyton informed Carly. “There’s a way to behave. There’s a way to conduct yourself that determines what circles you move in, who finds you acceptable.” With that, Peyton excused herself. Carly, having put a few additional pieces together related to this ironic encounter, walked to the bar to continue her talk with Peyton. Carly let the socialite know that she knew Peyton was the mother of the late Charlotte Reese Roberts (Kari Wuhrer) — Carly’s best friend.

“You’re Caroline Benson,” stated Peyton once Carly revealed she knew personal details of Peyton’s life. First, Peyton blasted Carly for appropriating her daughter’s name. Carly and Peyton rehashed Carly’s young life — each seeing things from their own unique perspectives. Peyton was livid when she reminded Carly that she had seduced her then-husband!

Peyton recounted her husband Daniel’s affair with, according to her, a very willing Carly. “He could see what you were — what you are — a greedy piece of trash!” snarled Peyton as she accused Carly of trying to appropriate her daughter’s life by sleeping with her father. “You ridiculous tart!”

Carly, naturally, stood up for herself, informing Peyton that she didn’t owe her any explanation. While Peyton may have wanted to have screamed at Carly at the top of her lungs, Linda Purl made the choice that her character, even in this emotional moment, would maintain some composure. After all, there were other patrons in the restaurant. Still, Peyton was firm when she strongly suggested to Carly that she should leave Jacksonville as she never belonged there.

We’re not sure if this is the last we’ll see of Linda Purl on GH but it’d be great if the character were to recur. Purl delivered a performance that’s a reminder of why the Daytime Emmys have a Guest Performer in a Drama Series category. Let’s hope we see Purl’s name on next year’s ballot!