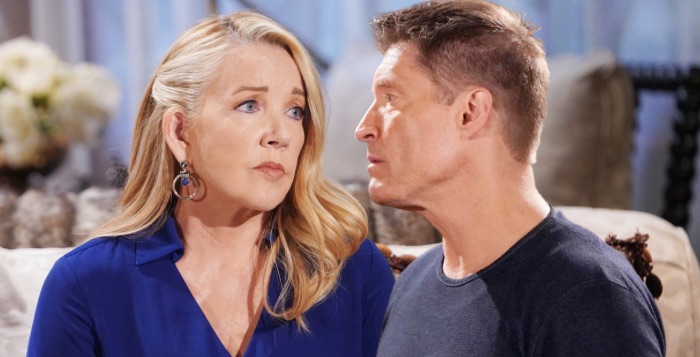 The Young and the Restless Nikki and Deacon

Both Victor Newman and Victoria Newman were worried about the prospect of Nikki Newman going to see Deacon Sharpe in Los Angeles [CBS crossover of The Young and the Restless and The Bold and the Beautiful].

After all, he’s the one who helped Diane Jenkins fake her death the last time around, so why did Nikki assume he’d be on her side and not Diane’s? Do the fans expect this to go well?

Y&R: All Grown Up

Nikki (Melody Thomas Scott) is not in the same head-space now as she was when she last encountered Deacon (Sean Kanan), 66% of you protest. She was much more vulnerable to him then. Now, she’s got herself together and she’ll be the one in charge. Nikki won’t let Deacon play her, and she’ll make it clear she’s the one in charge. Nikki will girl-boss, gate-keep, and gas-light… even if she and Deacon are both too old now to know what that means.

The Young and the Restless: Stay Strong

Deacon drove Nikki off the wagon last time, 18% of The Young and the Restless audience reminds, and it’s entirely possible he might do it again. Just seeing him is bad enough, but Nikki is planning to play mind games, too. Victor (Eric Braeden) offered to have his security team follow Nikki around, but they’ll be looking for kidnapping and death threats… not shots of vodka she can slip into her drink… and put at risk everything she’s worked so hard for.

Then again, 16% of voters don’t know what to think. Sure, Nikki is a diva who can more than take care of herself. But Deacon is a particular weakness for her, plus she has no proof he isn’t the mystery man Diane has been texting with. So what we’re saying is, be careful, Nikki. But also be entertaining while you’re at it. Because this cross-over better be worth it!