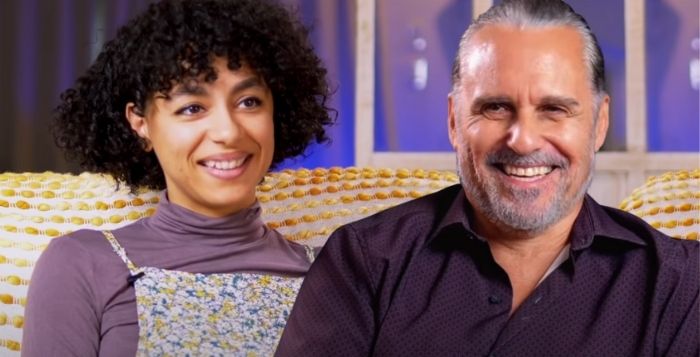 Maurice Benard ventured into new territory with daughter Heather Andresen on this week’s video podcast of State Of Mind – giving birth and motherhood.

Maurice Benard (Sonny, GH) and Andresen got the father and daughter routine out right away with this exchange, “You look like you are about 7 years old!” Benard laughed, clapped his hands, and shook his head side to side.

His daughter replied, “This couch is really big. My feet barely touch the floor.”

But the two soon got down to business. Benard quickly switched to host mode with, “I want you to take me through something. How was the pregnancy? Take me through it.”

“It was long,” she replied, reflecting on this time a year ago, just before she gave birth to her daughter, Eloise. “While I was pregnant it felt really hard, like a perpetual hangover but you didn’t have any fun the night before. You just feel terrible. But now, we are over a year past that, it feels like it was the easiest part.”

The young mother described the days that every pregnant woman dreads…the time right before giving birth when the mom-to-be is tired, swollen, and ready. “There were times at work, the building was three stories, I would leave the lunchroom, go down and by the time I would go down to the first floor again, where I am working, I would have to go pee and have to go all the way up again. Now, because I have gone all the way back up, I’m tired.”

The Moment of Birth

Her father wanted to hear what she had to say about the birth itself. “What was it like to have a baby? You are laying there…are you nervous? Excited? Scared? Happy?”

“Nervous,” Andresen responded. “Happy to not be pregnant, but feeling the last few moments of me just being me. I was like saying goodbye to myself, knowing it was going to be different forever now.

“I felt good because I had an epidural. It was nice knowing that I would have probably been feeling a lot of pain. That it would probably be hurting a lot more.” She explained in more detail, “After the baby is out, that was like a life-changing moment for me. I remember them putting her on my chest and thinking that was important. But I don’t remember how I felt or what I was thinking. I don’t remember where anyone was.”

Andresen adds perspective, “I am a different person now. Even though I liked who I was, I am different.” Summing up the new experience, “She [Eloise] could be crying and I am stressed out or I am mad at her because we are awake at three in the morning. And she will be putting a hand on me like this [gestures to her chest], and I am like, oh my god, I love you so much! Just, love.”

Maurice Benard discussed Heather’s complicated family history. “Heather’s mother was Paula’s [Benard’s wife] mother, who died, and then we adopted Heather.” The two went on to discuss growing up in the midst of drugs, prostitution, the power of being isolated, and learning about drug awareness in school. He also shared the intimate story of her adoption and when she called Paula “Mom” for the first time. For more of their family’s story, check out Maurice Benard’s book, Nothing General About It: How Love (and Lithium) Saved Me On and Off General Hospital.

Father and daughter addressed her first love relationship, an abusive one, the court battle that followed, and how she came out on the other side. So much to garner from the latest State Of Mind. Stick around until the end and meet the newest member of the Benard family. Baby Eloise makes her grand debut on her proud grandfather’s YouTube show. Don’t miss a minute of it! Fans can follow Maurice Benard on Twitter, Instagram, or State of Mind.


Today on @mbstateofmind I’m joined by my daughter Heather. (@LeftySlicks)

You’ll hear the beautiful story of how Heather came to be my daughter as we talk about her childhood and adoption, plus what it means to her to be a mother.

Very proud of my daughter @LeftySlicks on @mbstateofmind @YouTube we had an important discussion on boyfriends who became obsessive and possessive. Keep sending your comments! pic.twitter.com/diMc9VbJIr