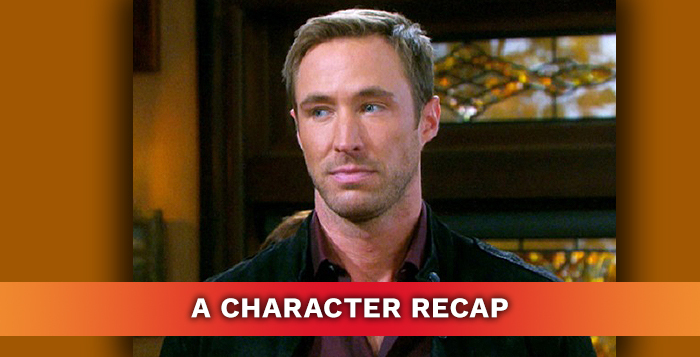 Days of our Lives Rex

Complicated paternity puzzles aren’t exactly a new phenomenon in daytime. But Days of our Lives certainly presented quite the pickle when it came to naming both of Rex Brady’s biological parents.

Who Is Rex Brady?

He and his twin sister were discovered lying inside a futuristic pod, clad in skimpy attire made from tinfoil, and their arrival had been heralded by a meteor shower.

Though they were sure there was a far more reasonable explanation, rescuers Shawn-Douglas and Belle Black couldn’t help but wonder if perhaps these strangers – whom they nicknamed the Gemini Twins – were extraterrestrial.

A far more plausible answer seemed within reach when the “visitors,” who eventually received the names Rex and Cassie, were revealed to have the same Phoenix tattoo sported by John Black. Surely Stefano DiMera was somehow responsible.

The Truth Is Out There
In time, it emerged that the twins had been scientifically engineered by Dr. Wilhelm Rolf using Tony DiMera’s (really lookalike Andre) sperm and Marlena Evans’ egg. Both twins took the last name DiMera and set about learning how to read, write, and speak English.

Both excelled at their studies and Rex, in particular, was shown to have quite a superior intellect. But just when he began to settle in with his new family, Rex uncovered some devastating news: he and Cassie had actually been sired using genetic material from Roman Brady (whom he despised) and Kate Roberts.

The revelation deeply affected Rex, who soon withdrew from his friends and began to suffer from both wild mood swings and crippling headaches. When the Salem Stalker began to claim victims, Rex became a prime suspect and he was briefly jailed when Maggie Horton’s blood was discovered on one of his sweatshirts.

He was released just in time to watch Cassie’s dead body emerge from the town’s turkey piñata and witness his mother standing nearby with a bloody knife in her hand! Subsequently, Roman and Tony were felled by the slayer and a grief-stricken Rex – touched that Shawn Brady Sr. had reached out to him – adopted his natural father’s last name.

Rex found comfort in the arms of Mimi Lockhart and both delighted in the revelation that all the supposedly dead Salemites were actually alive and well. However, the couple was soon torn asunder when Mimi became pregnant and opted for an abortion rather than tell Rex about her condition.

In response, Rex left town and in the ensuing years, he earned a medical degree and became engaged to fellow physician (and Salem native) Sarah Horton. Both returned to the Midwest hamlet, intent on making it their new home.

But trouble soon followed. Not only did Sarah learn that Rex had cheated on her with Mimi – who bore him a daughter – but she also got him to admit to another long ago affair… with her half-sister, Noelle!

With his relationship in tatters, Rex relocated to Chicago, hoping to rebuild his shattered life. Days of our Lives airs weekdays on NBC. Check your local listings for airtimes.