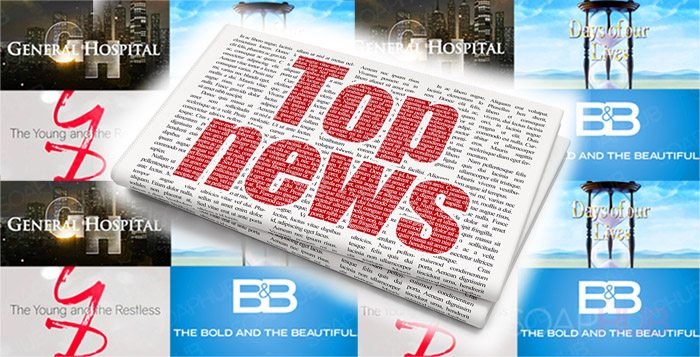 General Hospital duo open up about their surging storyline… Days of our Lives actress bids a sad goodbye to her mother… Get to know two stars from The Young and the Restless… Here’s everything you missed in the daytime world — with links — in the Soap Hub soap opera weekly news wrap.

Now that Spencer Cassadine has been sprung from prison on General Hospital the setting is right for things to heat up between him and Trina Robinson. Actors Nicholas Alexander Chavez and Tabyana Ali opened up about their characters’ connection during a Coastal Entertainment Zoom event.

Their State of Mind

GH’s Maurice Benard sat down with A Martinez (ex-Cruz, Santa Barbara; ex-Roy, GH) on this week’s episode of his video podcast of State Of Mind. The pair delved into topics they both know well: acting, discrimination, and the depression that comes with constant rejection.

The Young and the Restless: Getting to Know Them

Want to know more about a pair of newcomers on The Young and the Restless? Soap Hub has gathered up seven facts about veteran star James Hyde (Jeremy Stark), as well as Zuleyka Silver, who plays savvy businesswoman Audra Charles revealed on Soap Hub weekly news.

The Bold and the Beautiful: Moving Words

Karla Mosley, remembered as Maya Benedict on The Bold and the Beautiful, paid tribute to her father on World AIDS Day. Her heartfelt words are sure to move you.

Days of our Lives: A Tribute to Her Mother

Days of our Lives’ Mary Beth Evans (Kayla Johnson) lost her beloved mother, Dianne, earlier this month. The actress penned a touching tribute to her on Instagram, which you can read here on Soap Hub weekly news.

Linsey Godfrey (Sarah Horton Cook, DAYS) has always been open about her mental health struggles. She recently discussed them on Lifestyle Magazine TV Show and shared photos and a video of her appearance on Instagram.

In Other Soap Hub Weekly News: Travel and Wellness

GH’s Eden McCoy (Josslyn Jacks) loves to travel the world outside of Los Angeles. She chatted with Soap Hub weekly news about some of her adventures.

Meanwhile, Y&R’s James Hyde (Jeremy Stark) knows a thing or two about keeping fit. He spoke out about workouts for people of all ages.