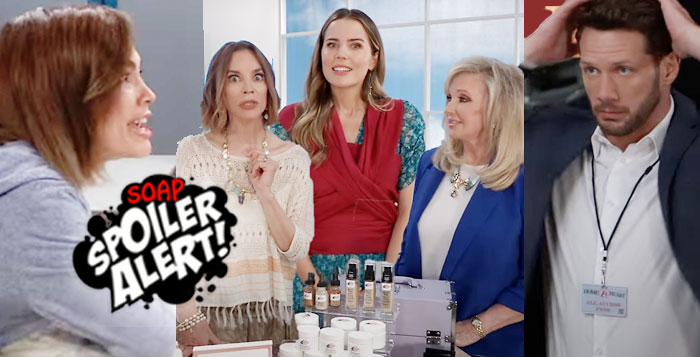 Your GH spoilers preview video for July 5 – July 8, 2022, is here! Find out what the Port Charles power players are plotting this week.

Valentin Cassadine (James Patrick Stuart) unleashes on Victor Cassadine (Charles Shaughnessy) and threatens to cut his throat if need be. And, he looks like he’s serious. Does his father threaten the life of a certain gorgeous spy? Is Valentin’s threat enough to get Victor to back down?

Is that meeting the reason why Laura Collins (Genie Francis) asks Anna Devane (Finola Hughes) if everything is okay? Laura doesn’t trust either of those men as far as she can throw them and certainly wouldn’t want Anna involved in that mess.

Also feeling the heat is Spencer Cassadine (Nicholas Alexander Chavez). Don’t worry, the gals are right there to cool him off and toss him in the pool.

Carly Corinthos (Laura Wright) is poolside as well, but not for any happy occasion. She’s there to cry about her losses. She’s not the only one upset either. Olivia Quartermaine (Lisa LoCicero) tells her husband that everything is falling apart.

Meanwhile, Liz Webber (Rebecca Herbst) throws quite the fit when Kevin Collins (Jon Lindstrom) visits her. So much so, she tosses puzzle pieces at him. What has her this heated?

Speaking of meltdowns, Sasha Gilmore Corbin (Sofia Mattsson) has one too, but hers is on live TV. She represents the Deception ladies on camera to promote their brand but once the host brings up babies, it’s all over for the grieving mother. See it all for yourself in the sneak peek video below.