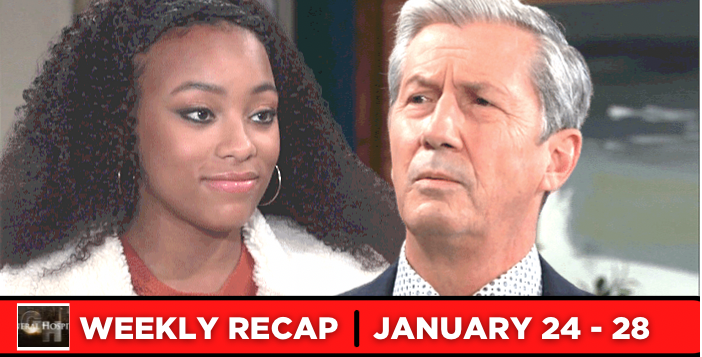 The General Hospital recaps for January 24 – January 28, 2022, feature a father and son reaching the same startling conclusion, a weekend in nature cut mercilessly short, and so much more.

Ned Quartermaine (Wally Kurth) and Olivia Falconeri Quartermaine (Lisa LoCicero) explain to Leo (Easton Rocket Sweda) that Ned is interested in adopting him. The boy is receptive to the idea. Ned makes familial overtures to Austin Gatlin-Holt (Roger Howarth) but is rebuffed.

Maxie Jones (Kirsten Storms) is put out by Louise’s bond with Brook Lynn Quartermaine (Amanda Setton)…Victor Cassadine (Charles Shaughnessy) offers to pocket Bailey’s sonogram, which Valentin Cassadine (James Patrick Stuart) has continued to hold onto. Victor and Maxie run into one another, and she drops Louise’s sonogram. Victor is struck by the snaps’ similarities.

Carly Corinthos (Laura Wright) continues to beg Sonny Corinthos (Maurice Benard) for time apart…Sonny and Jennifer Smith (Holly Gagnier) tangle. Afterward, she contacts a person unknown and lets them know that now is the time to make their next move.

Curtis Ashford (Donnell Turner) invites Marshall Ashford (Robert Gossett) to The Savoy, intent on strengthening their father/son bond. Sonny interrupts the pair with the declaration that he wants Curtis’s club.

Sonny clarifies that he wants to rent The Savoy, posthaste. Curtis denies the request, sending Sonny spiraling. Drew Cain (Cameron Mathison) attempts to calm the situation and receives a sharp rebuke from Sonny. Nina Reeves (Cynthia Watros) convinces Sonny to exit the premises. She takes him back to his penthouse apartment and insists on either staying to watch over him or placing a call to one of his family members. Sonny grouses that she can stay if she so wishes.

Felicia Scorpio (Kristina Wagner) and Maxie toast to Luke Spencer’s (Tony Geary) memory. Maxie makes clear her disinterest in discussing her love life, especially as it relates to Austin…Austin reveals to Britt Westbourne (Kelly Thiebaud) that his brother is on the autism spectrum…Victor tracks Austin down and inquires how to reunite a sonogram and its rightful owner.

Alexis Davis (Nancy Lee Grahn) tables her interactions with Harmony Miller (Inga Cadranel) until such time as she can gauge Kristina Corinthos’s (Lexi Ainsworth) feelings on the matter. Opposite this, Kristina tells Sam McCall (Kelly Monaco) that she doesn’t want to be the reason Alexis loses her new confidant.

Esme Prince (Avery Kristen Pohl) is put out by Spencer Cassadine’s (Nicholas Alexnder Chavez) interaction with Trina Robinson (Sydney Mikayla)…Carly makes a point of asking Josslyn Jacks (Eden McCoy) if she’s packed protection for her weekend away with Cameron and their entourage.

Sonny’s mania increases to dangerous proportions. After injuring Nina’s wrist, he agrees to her plea that he seek immediate medical help…Ava Jerome Cassadine (Maura West) and Carly have a catty exchange at the yoga studio. Carly admits to Brook Lynn that she’s moved out of chez Corinthos.

In Pautauk, Austin has a confusing flash of memory that seems to indicate that Maxie was having a calm, rational conversation with another person…During a confab with Britt, Victor pointedly brings up her Huntington’s diagnosis.

Cameron, Josslyn, Trina, Spencer, and Esme arrive at Sonny’s cabin. Trina reignites Spencer’s love of skiing. Esme prepares the group spiked hot toddies…Valentin begins to suspect that Brook Lynn is pulling another fast one where Bailey is concerned…Victor informs Peter August (Wes Ramsey) that he knows exactly where his daughter is.

Valentin deduces that Bailey and Louise are one and the same. Victor apprises Peter of the same fact…Cameron, Josslyn, and Trina consume their drugged beverages. Esme stirs the pot by bringing up Trina’s feelings for Cameron. Trina flees the scene, and Josslyn decries Esme’s actions…Maxie catches Austin off-guard with a kiss, hopeful that her action will distract him from recalling anything further.

Carly tries to avail herself to Sasha Gilmore (Sofia Mattsson), but her efforts are not appreciated. Sonny very nearly leaves the hospital without his refilled lithium. A chance encounter with a struggling Brando Corbin (Johnny Wactor) convinces him to confront his problems head-on.

Upon realizing that Valentin has rumbled Maxie and Brook Lynn’s scheme, Victor has him incapacitated and thrown into the trunk of a car…Maxie seemingly convinces Austin that his memories of the night of Lousie’s birth are faulty…Laura Collins (Genie Francis) convinces Martin Grey (Michael E. Knight) to drop Peter as a client. Peter and Louise cross paths…Esme and Spencer take their leave of Cameron, Josslyn, and Trina, but not before the former places a recording device in Cameron and Josslyn’s room.