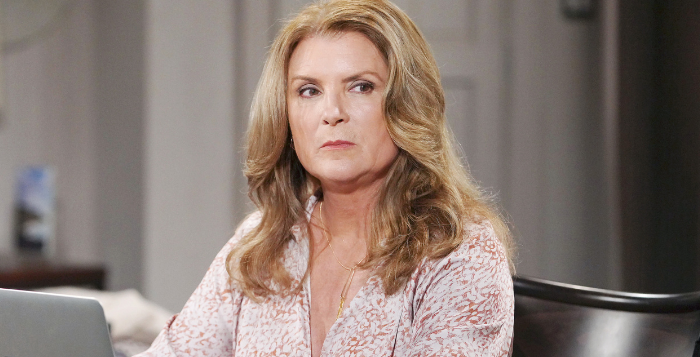 The Bold and the Beautiful Kimberlin Brown as Sheila Carter

You know you’ve done a lot of bad things when you have to walk around town in a disguise, as Sheila Carter — AKA Michelina — on The Bold and the Beautiful has discovered. Is Sheila doomed to don her fake look for the rest of her life? It appears that way.

However, it’s possible that the team at B&B could come up with a way to redeem Sheila (Kimberlin Brown) so that she can lose the wig and the prosthetics. It’s going to take some doing, however, given that Sheila crossed several lines when she shot both her son Finn Finnegan (Tanner Novlan) and daughter-in-law Steffy Forrester Finnegan (Jacqueline MacInnes Wood), nearly ending their lives. Find out how B&B might be able to give Sheila yet another chance.

There were new stakes when Sheila came back this last time. Viewers learned that she has blood ties to not only Finn but also his and Steffy’s son Hayes. Hypothetically, if little Hayes faced a medical crisis, he might need his grandmother Sheila to step in and help out with say, perhaps, a blood transfusion. We saw how Flo Fulton (Katrina Bowden) found acceptance from the Logans after she gave Katie Logan (Heather Tom) a kidney. Maybe Sheila will find favor with her victims if she does a good deed.

Bold and the Beautiful – Good Deeds

We’ve seen Sheila not be totally selfish. Remember when she helped Taylor Hayes (Krista Allen) up onto the hospital roof after the good doctor took a near-fatal fall? There are lots of ways Sheila can give of herself in order to ingratiate herself back into the lives of the Forresters and Finnegans. She can push someone out of the way of a speeding car or alert folks that their house is on fire.

Maybe this Sheila isn’t even Sheila? There was an imposter claiming to be the naughty nurse back in Genoa City (played by Michelle Stafford; Phyllis Summers). That woman was killed by Lauren Fenmore Baldwin (Tracey Bregman). Was that the real Sheila? Or is the one we’re currently seeing the true Sheila?