The History of The Bold and the Beautiful 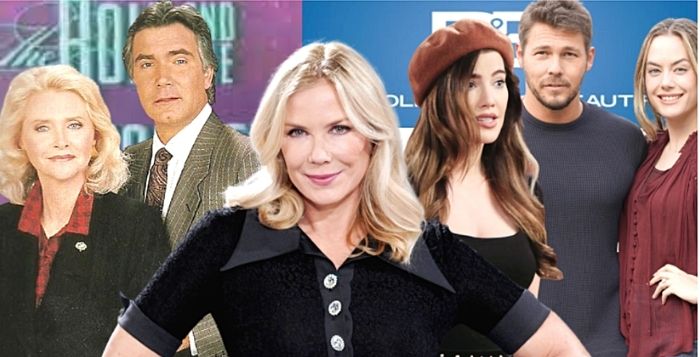 Jump To: The History of The Bold and the Beautiful: The 1980s

Following the success of The Young and the Restless, William J. Bell and Lee Phillip Bell created another daytime drama for CBS – The Bold and the Beautiful, which debuted on March 23, 1987.

The Bold and the Beautiful — The History

B&B, which took the place of short-lived soap opera Capitol on the CBS daytime lineup, wasn’t just another Bill Bell series. While Bell wrote for Guiding Light, As the World Turns, and Days of our Lives, B&B was going to be a true family affair. Bill, Lee, and their entire family relocated from their home in Chicago to start up the half-hour soap, which was originally titled “Rags,” slang for the garment industry that served as The Bold and the Beautiful’s backdrop.

The Bold and the Beautiful — The Early Years

In B&B’s first few years, viewers were introduced to the wealthy Forrester clan and the middle-class Logan family. Eric Forrester (John McCook) rekindled his love for Beth Logan (Nancy Burnett). But the couple didn’t stand a chance as viewers seemed to root primarily for Eric’s wife, Stephanie Douglas Forrester (Susan Flannery) to succeed in breaking them up so she could hold onto her family. Stephanie’s victory was bittersweet as Eric agreed to remain with her but their marriage would be in name only.

In early 1989, The Bold and the Beautiful became energized with the introduction of Sally Spectra (Darlene Conley), who made many attempts to insinuate herself into Stephanie’s life, stealing Forrester designs to help put Spectra Fashions on the map.

In the 1990s, there seemed to be one eternal question that drove much of the show’s story –- would Ridge choose Taylor Hayes (Hunter Tylo) or Brooke to be his wife? B&B took the No. 2 position in the ratings when Genoa City’s (and Y&R transplants) Sheila Carter (Kimberlin Brown) and Lauren Fenmore (Tracey Bregman) continued their epic feud in Los Angeles.

As The Bold and the Beautiful was set in the real-life cities of Los Angeles and Beverly Hills, the show organically incorporated celebrities into the show. Steve Allen and Jayne Meadows, Carol Channing, Fabio, Charlton Heston, and others popped up alongside the Forresters and Sally Spectra.

Most soaps had characters singing and singing well, but B&B shined with songbirds Macy Alexander (Bobbie Eakes) and Thorne. The couple serenaded each other with such ballads as When I Fall in Love, What’s Forever For, and Open Arms.

The Bold and the Beautiful Educates and Entertains Viewers

B&B has won the Daytime Emmy for Outstanding Drama Series three times (2009, 2010, and 2011). The show has become well-known for its shocking story twists including Brooke having sex by mistake with Oliver Jones (she thought he was Ridge!), Nicole Avant (Reign Edwards) saying Maya wasn’t her sister but rather her brother Myron, and Sheila popping up alive after being believed shot and killed over on The Young and the Restless.

The show’s international appeal is unparalleled. In 2010, the show was named “Most Popular Daytime TV Soap – Current” by The Guinness World Records. The show has been shot on location in Barbados, Italy, and Australia.

The Bold and the Beautiful is the most successful daytime show to have debuted since its sister soap Y&R. The show began in 1987 telling the stories of three families – the Forresters, the Logans, and the Spencers. Today, those three clans remain on the show’s canvas.

The Bold and the Beautiful (BB) airs weekdays on CBS. Check your local listings for airtimes. For more about what’s coming up in Los Angeles, check out all the latest that’s been posted on B&B spoilers.