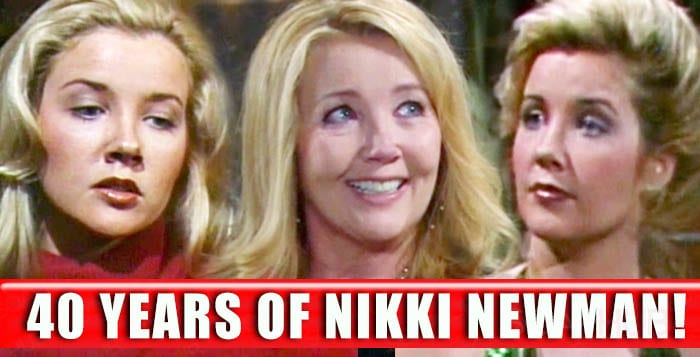 Nikki Newman The Young and the Restless

The Young and the Restless star Melody Thomas Scott is beloved by fans everywhere. And today, she’s celebrating her 40th anniversary with the top-rated soap as heroine Nikki Reed Newman!

Over the decades, Scott’s been at the center of Genoa City stories as Nikki has found and lost love, battled enemies, survived numerous crises, taken off her clothes, and so much more!

Don’t miss today’s episode of YR, which features a special hour devoted to the Genoa City mainstay. The show will air flashbacks from memorable moments over Nikki’s life — some you may have even forgotten about. Now, Soap Hub will take you back through the life of Nikki Newman,

Sex Education
YR has always told socially responsible stories and it addressed the issue of sexually transmitted diseases when it was revealed that Paul Williams (Doug Davidson) had given Nikki an STD. Years later, viewers learned that Paul also gave Nikki a son, Dylan (Steve Burton).

Pregnant Pause
The chemistry between Victor (Eric Braeden) and Nikki has always been undeniable, but Victor, after sleeping with Nikki, pushed her into the arms of Kevin Bancroft (Christopher Holder) while he started seeing Lorie Brooks (Jaime Lyn Bauer).

Trivia: Nikki named her daughter, Victoria, not after Victor but after Kevin’s grandmother! Eventually, Victor (Eric Braeden) learned he was the baby’s father and he and Nikki were reunited and married.

Through The Eyes Of Love
Nikki and Victor’s love theme played not only at the couple’s wedding, but also when the duo divorced in 1989! Their pal Col. Douglas Austin (the late Michael Evans) tricked the pair into showing up for dinner at the private dining room at the Colonnade.

Neither knew …continue reading on the next page —>