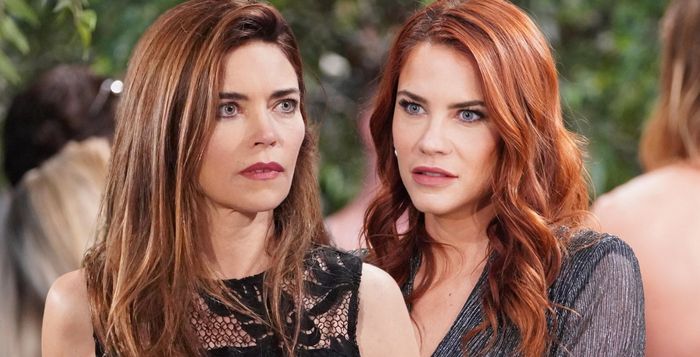 The Young and the Restless Victoria and Sally

The Young and the Restless has always been the show of corporate intrigue. Victor Newman once stole Jabot away from John Abbott. Jack Abbott won it back. There was Jill Abbott’s ongoing attempts to be on the board and the juggling for Chief Executive Officer supremacy between Victoria Newman and Adam Newman.

The Young and the Restless: Corporate Crime

They all played for big stakes and big bucks. And they all made mistakes. Some were little. Some were big. But none of them were as horrible as what we were forced to witness last week.

Did you hear? It’s so awful, we can barely put it into words. Sally Spectra (Courtney Hope) missed a marketing summit! She thought it was in the afternoon, but it was in the morning, and she missed it!

Chloe Mitchell Fisher (Elizabeth Hendrickson) had to cover for her! And she is still so upset about it, that she feels compelled to bring it up to Nicholas Newman (Joshua Morrow).

But that’s not the worst of it. Victoria (Amelia Heinle) is so scandalized by the sin committed that she wanted Nick to fire Sally on the spot. He slept with her instead. But that’s neither here nor there at the moment.

Young and the Restless: Nothing Compares

We understand Victoria’s horror. After all, it’s not like Sally married a con artist who pulled the wool over her entire family’s eyes, merged his company with theirs, took a $500 million buyout, then was outed as having faked his cancer and death sentence, embarrassing the otherwise sin-free Newman family, followed by a very scandalous death. Sally didn’t do any of that. Those are little peccadillos that can easily be dismissed and even forgiven, under the circumstances.

But missing a meeting…well, a woman who’d miss a meeting cannot be trusted to run a company. Genoa City has never seen incompetence on this scale!