The History of Days of our Lives 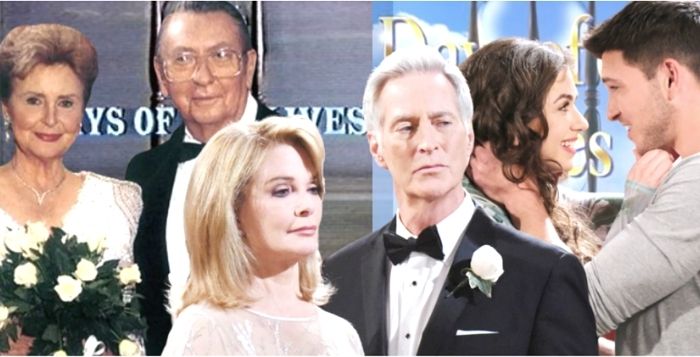 Days of our Lives The Complete History

Despite premiering in 1965, the year that saw Ed White make the first U.S. spacewalk, and the arrival of the first American combat troops on Vietnam soil, NBC’s Days of our Lives was hardly a topical or weighty program.

Days of our Lives — The History

Its origins were simple. A trio of collaborators – Irna Phillips, the most prolific creator of daytime dramas, Ted Corday, the former stern taskmaster of Phillips’s premiere serial, As the World Turns, and novelist Allan Chase – decided that there needed to exist a soap opera unapologetically set in a Midwestern town.

Their creation would be equal parts One Man’s Family – the radio “novel” about a businessman and his troubled brood – and medical melodrama, a genre favored by Phillips, a notorious hypochondriac.

There were also unmistakable parallels to As the World Turns. Like the Hughes family before them, the Hortons were comfortably middle class, and stewarded by a learned patriarch – and the makeup of the clans was similar: Chris and Nancy Hughes were parents to three children (two sons and a daughter) and they were mourning the recent loss of their second-oldest; Tom and Alice Horton had raised five children (three boys, two girls), one of whom was presumed killed during a skirmish overseas.

Though nowhere near a qualified success during its first year on air (it ranked tenth out of 17 serials), DAYS blossomed under the pen of William J. Bell, a Phillips protégé.

For nearly a decade, he steered Days of our Lives characters through a wide array of sexual catastrophes – two women became pregnant by the same man, a man rapes his brother’s wife, and a mother and daughter vie for a con artist’s affection, a woman joins a nunnery after falling in love with her plastic surgery-altered brother – and he peppered their dialogue with the most popular psychiatric jargon of the day.

By the middle of the 1970s, during which time Bell underling Pat Falken Smith had assumed command of the ship, and much of the action concerned the fraught and often fractious Julie Olson and Doug Williams coupling, DOOL garnered much critical acclaim from the mainstream press, including the designation “Most Daring Drama” from Time Magazine.

Come a new decade, comes a new focus. While the ’80s still emphasized grandiose love affairs, the domestic travails of the Horton family gave way to action/adventure plots set in far-flung and exotic locations, as well as the perusal of several serial offenders, including a strangler, a slasher, and a rapist overly fond of nubile hospital attendants.

The Reinvention of Days of our Lives

In addition to the continued trials and tribulations of the Horton family, DAYS presently focuses on the monied (and corrupt) DiMera and Kiriakis dynasties, the working middle-class Bradys, the Hernandez clan, the Blacks, and the blended Carver/Grant/Price clan.

The Corday family – represented today by series Executive Producer Ken Corday, the son of Ted and Betty – have been the true driving force behind Days of our Lives since its nebulous period.

Initially, a half-hour series at the time of its debut, DAYS was expanded to an hour on April 21, 1975. Between 1992 and 1994, three specially prepared episodes were shown during primetime hours.

For nearly 30 years, DAYS was headlined by former Paramount Pictures star Macdonald Carey, who played family patriarch Tom Horton. Since 1966, it has been his voice heard intoning the soap’s epigraph: “Like sands through the hourglass, so are the days of our lives.”

Suzanne Rogers, who portrays Maggie Horton Kiriakis, is currently the longest-serving member of the DOOL cast; aside from a brief hiatus between 1984-1985, Rogers has appeared near continuously since August 1973. Susan Seaforth Hayes holds the distinction of being the only performer to have made appearances in all seven decades that Days of our Lives has been on the air.

DAYS can count Academy Award-winning actress Julia Roberts, novelists Brian Keene and Janet Dailey, and primetime sensation Loni Anderson amongst its most ardent fans. It was reported that during his tenure as a Supreme Court Justice, Thurgood Marshall would call a recess to court proceedings in order to watch the show.

Since the introduction of a separate Emmy Awards ceremony dedicated to daytime programs, Days of our Lives has snagged a number of statues, including four for Outstanding Drama Series (1978; 2013; 2015; and 2018), and three for Outstanding Drama Series Writing Team (1976; 2012; and 2018). Several performers, such as Macdonald Carey, Eric Martsolf, and Suzanne Rogers, have also been awarded for their acting prowess.

As of 2021, DAYS is noted for being the second longest-running daytime soap opera currently airing in the United States, as well as the world’s third longest-running televised soap opera after Britain’s Coronation Street, and ABC’s General Hospital. That changed on September 12, 2022, when DAYS stopped airing on NBC and moved over to the streaming service Peacock+ exclusively.