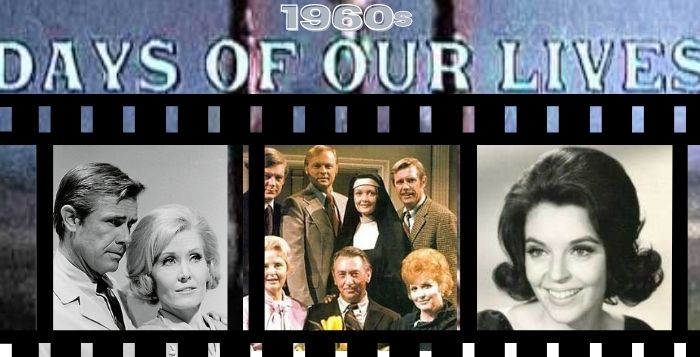 Days of our Lives The Complete History

The meteoric ascension of ratings anemic Days of our Lives was down, entirely, to the ingenuity of William J. Bell - and his proclivity for preoccupying his characters with all manners of sexual deviances.

The Real World: A pilot episode, featuring actress Mary Jackson in the role of Alice Horton, is filmed in June; Frances Reid, a veteran of As the World Turns, is later cast. DAYS premieres on November 8. In addition to Macdonald Carey (Dr. Thomas Horton) and Reid, the original cast included John Clarke (Mickey Horton), Maree Cheatham (Marie Horton), Dick Colla (Tony Merritt), and Carla Doherty (Julie Olson) ... The Reel World: Juvenile delinquent Julie exacerbates familial tensions when she commits an act of thievery....The engagement of Marie and Tony is marred when he discovers that he's suffering from a potentially fatal blood disease. Tony abandons Marie the night before their wedding; she attempts suicide in response.

Off-camera: Regina Gleason and Astrid Warner debuted as Kitty Horton and Sandy Horton respectively; it short order, Warner is out and actress Heather North is in. Clive Clerk (David Martin) takes his leave. The role of Julie Horton is recast - twice; Broadway veteran Kathy Dunn plays her between January and June; she's later replaced by Cathy Ferrar ... On-camera: Marie and Tony's efforts to reconcile are all for naught....preemie Richard "Dickie" Martin is welcomed into the world by parents Susan and David; Susan reneges on her promise to put the baby up for adoption, and David is pressured into remaining wed to her - for Dickie's sake....Bill proposes to Laura, but does a runner when he's diagnosed with tuberculosis of the bone; Laura finds comfort in Mickey's arms; they wed in December....Bill returns with a ward (Timmy McCall) and a medical colleague, amnesiac Dr. Mark Brooks in tow....Marie grows enamored of Mark....Dickie dies due to David's negligence; a distraught Susan shoots David dead; she's acquitted on grounds of temporary insanity, then suffers a near-death experience after being shot herself by David's revenge-seeking mother....The Hortons are chagrined to learn that Julie is pregnant with David's child ... Off-camera: Viewer outrage over the death of Dickie Hunter results in head writer William J Bell vowing to never again write out an infant character in such a manner. That vow is kept for over two decades.

The Real World: DAYS taps Susan Seaforth to replace the outgoing Cathy Ferrar; her Julie first appears in episode 780 (airdate: Wednesday, December 11, 1968)....Irna Phillips brought legal proceedings against Screen Gems in regards to the ownership of the soap ... The Reel World: At Tom's suggestion, Julie places her baby boy up for adoption; he is placed in the care of Scott Banning and his terminally ill wife Janet; the couple christens the child Bradley....Bill rapes - and impregnates - Laura; Laura and Tom conspire to keep the circumstances of the babe's conception from Mickey, whom they both learn is sterile....Tom and Mickey uncover an inconvenient truth: Dr. Mark Brooks and Tommy Horton are one and the same; Marie is so horrified by the revelation that she joins a nunnery....Laura is grievously injured in an automobile accident; Michael William Horton is delivered via cesarean....Tommy attempts to make a go of his marriage with Kitty but discovers she's carrying on with Dr. Elliot Kincaid....Bill and Susan enjoy a brief engagement, but part ways when he learns that Michael is biologically his; Susan finds employment in the Banning household as Bradley's nanny.

Offscreen: Episode 1,000 of Days of our Lives airs on October 29....Regina Gleason is out as Kitty ... Onscreen: Julie discovers that Bradley is the child she gave up for adoption. When Janet passes, Julie petitions the court to reinstate her parental rights; she is successful in her efforts....Tommy hires a P.I. to delve into Kitty's past; the results of the investigation so trouble Tommy that he initiates divorce proceedings....Julie magnanimously allows Scott access to David (formerly Bradley), but on the proviso that Susan, whom Scott is enamored of, is never present. Over time, Julie and Scott grow fond of one another, and he proposes marriage....A carelessly engaged recorder tapes a private confab between Laura and Tom during which the subjects of Mickey's sterility and Michael's true paternity are broached. The recording falls into Kitty's mercenary hands. She attempts to blackmail Bill, but he locates and relieves her of the evidence; mere seconds after Bill takes his leave of Kitty, she suffers a fatal heart attack. An investigation into Kitty's death is launched, Bill is identified as a person of interest, and he confesses to arguing with Kitty the night of her death. When pressed for further details, Bill chooses to plead the fifth.

Off-camera: Nadyne Turney originates the part of Linda Patterson, but she's soon replaced by Margaret Mason....John Aniston and Bill Hayes (Brent Douglas) make their daytime TV debuts. Though the former is known for playing Victor Kiriakis in the present-day cast, his first DAYS role is prison doctor Eric Richards; Hayes is told that his time on the soap will be finite, though he is soon upped from recurring player to contracted actor ... On-camera: Julie and Scott are wed, much to Susan's dissatisfaction....Bill is found guilty of involuntary manslaughter and sentenced to one to three years in prison....Sandy, reeling from the death of her mother, severs ties with the Hortons, and turns to her new beau, Bruce, for comfort....Bill regales Brent, his cellmate, with tales of various Salemites - including Susan, the very wealthy widow; upon his release, Brent hightails it to Bill's hometown with the intention of wooing, and bilking, Mrs. Martin....Laura becomes frigid, resulting in an estrangement between her and Mickey; Mickey finds sexual fulfillment via an affair with his secretary, Linda Patterson....Young David grows emotionally distant from Julie....Bill is granted early release....Mickey and Laura reconcile; he calls it quits with Linda, who learns that she's pregnant.

Days of our Lives (DOOL) airs weekdays on NBC. Check your local listings for airtimes. For more about what’s coming up in Salem, check out all the latest that's been posted on Days of our Lives spoilers, and for an in-depth look at the show’s history, click here.