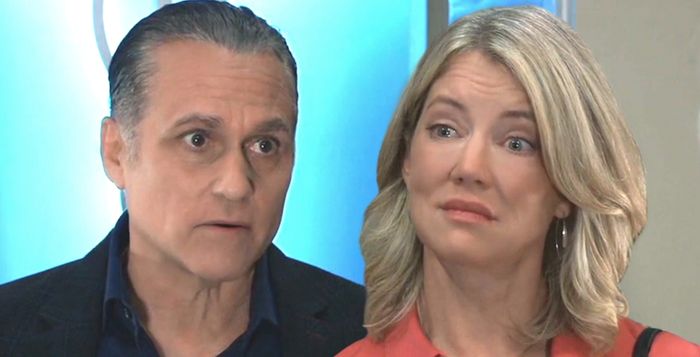 On General Hospital, Nina Reeves lost 20 years of her life to a coma her mother was responsible for. She lost her husband, and she thought she lost her child. Then, when she finally found her long-lost daughter, she learned Nelle Benson was dead. And she doesn’t yet know that Willow Tait is her other daughter.

This means that, at the moment, the most important relationship in Nina’s (Cynthia Watros) life is with Sonny Corinthos (Maurice Benard). (As is everyone’s in Port Charles). But the thing Nina wants most from Sonny, he refuses to give her.

No, what Nina wants from Sonny is his loyalty. And fans are dumbfounded about why he still can’t get that.

Everyone knows that Sonny is loyal to his family. Even as currently, half of them, including Carly Corinthos (Laura Wright), Michael Corinthos (Chad Duell), and Josslyn Jacks (Eden McCoy), have cruelly turned against him.

And everyone knows that Sonny is loyal to his workforce. The benefits at his… ahem, coffee business…are rumored to be terrific — they even include dental!

Except that Nina isn’t technically his family or his employee. Who is she? She’s supposedly the woman he now loves or at least deeply cares about.

And therein lies the rub. Old habits die hard, and Sonny is still instinctively more loyal to the woman who dumped him and her menagerie of brats than he is to the very insecure woman who accidentally fell in love with him. Nina can take care of herself in business. But she needs Sonny to mind her heart. And, so far, he’s proven unwilling to do that.