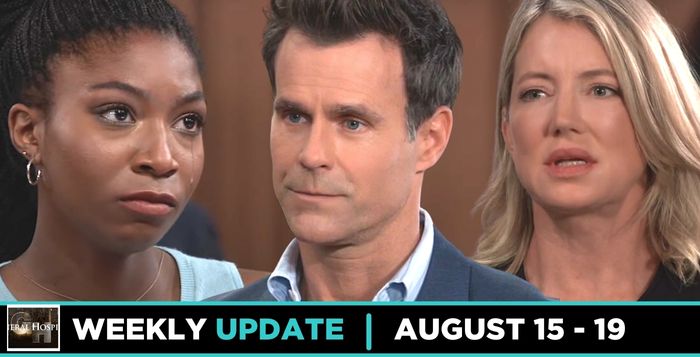 GH spoilers weekly update for August 15 – 19, 2022, tease the week ahead is full of a romantic date and a physical fight. Tune in next week so you can catch all of the action in Port Charles!

This week, Trina Robinson’s (Tabyana Ali) trial wrapped up, and she anxiously awaited her fate. Spencer Cassadine (Nicholas Alexander Chavez) made a life-changing decision that resulted in him having to spend three months in Pentonville. He’s going to finally pay for what he did.

Also, Willow Tait (Katelyn MacMullen) ended up breaking down in  Ava Jerome Cassadine’s (Maura West) arms, which was unexpected. Willow had hoped to find a Jane Doe in the hospital, but she didn’t. Of course, Michael Corinthos (Chad Duell) wondered what Ava did to make Willow cry, but for once, Ava was innocent — mostly.

Next week, you can expect to see Trina nervously awaiting her verdict, and she’ll ultimately learn her fate. Plus, Sonny Corinthos (Maurice Benard) and Nina Reeves (Cynthia Watros) enjoy a romantic date, but later in the week, things go south for Nina when she and Carly Corinthos (Laura Wright) resort to physical blows. Be sure to check out the daily breakdown below.

Finn and Terry discuss their worries about Elizabeth.
Curtis and Portia anxiously await to see if their plan works.
Cam meets Dex, and Cam does not have a good feeling about him.
Spencer makes a tough decision.
Victor questions Nikolas about Esme.
Trina nervously awaits the verdict.

Trina learns her fate.
Olivia discusses Carly and Drew’s budding relationship.
Sonny and Nina have a romantic date.
Later, Sonny confronts Dex about his past.
Willow receives some devastating news.

Spencer is having second thoughts.
Ava and Nikolas conspire with an unlikely person in order to protect themselves.
Willow opens up to TJ.
Nina and Carly come to blows.
Jordan starts to investigate the Esme case.

Valentin tries to convince Victor that Anna is no longer a problem.
Meanwhile, Anna concocts a plan with Lucy.
Brook Lynn has a surprise assist to help Chase with his career.
Scott wants to tell Lucy about Cody.
Maxie encourages Britt to give Cody a chance.
Elizabeth is triggered by another disturbing memory.

Finn reaches out to someone in Elizabeth’s past.
Dante is afraid he may have messed things up with Sam.
Alexis and Gregory connect.
Austin tries to set boundaries with a family member.
Britt confronts Cody.