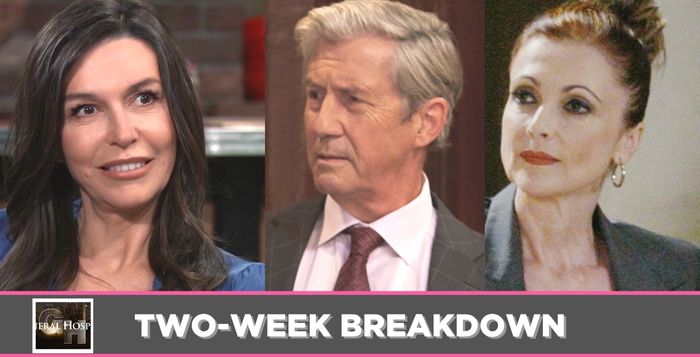 GH spoilers two-week breakdown for October 17 – 28, 2022, promises your favorite Port Charles players stirring up a whole lot of drama. You will not want to miss a moment of the action!

There are a lot of hot plots going on in town and Anna Devane (Finola Hughes) remains in the middle of at least one of them. Her plan to expose and take down Victor Cassadine (Charles Shaughnessy) has hit many a snag but she is not giving up. She even teams up with Jordan Ashford (Tanisha Harper) to solve her case. Is it worth it, though?

Speaking of Victor, he works overtime to preserve his dignity, his freedom, and his “good” name. He still has several tricks up his sleeve including manipulating Trina Robinson (Tabyana Ali) for intel, attempting to manipulate Valentin Cassadine (James Patrick Stuart), and working his magic on Lucy Coe (Lynn Herring). Will it work? It sure looks like it!

All the while, Esme Prince (Avery Kristen Pohl) tries to save herself from her terrifying ordeal. The young baddie taps into her inner evil to get the upper hand. Unfortunately, she may not have what it takes to go up against all those who want to see her brought to justice. Her enemies are on the rise and they aren’t going to let her walk away from all this.

Even more drama hits Port Charles when Holly Sutton (Emma Samms) returns! She may be a sore sight for some but others are not happy to have her around, and she knows it! A lot has changed and she needs to keep up the pace.

Carly Corinthos (Laura Wright) is in for a surprise. What is coming her way?
Mac Scorpio (John J. York) and Felicia Scorpio (Kristina Wagner) update Scott Baldwin (Kin Shriner). They have news for him.
Lucy confronts Anna. Will this lead to a breakdown in their communication?
Victor makes Valentin an offer. Will he take it?
Britt Westbourne (Kelly Thiebaud) reveals more of her past to Cody Bell (Josh Kelly). He’s happy to hear it. Every single word.

Lucy is in a dangerous spot. How does she get into this mess? And, will she get out of it?
Cody offers his help to Britt. Is he being genuine?
Esme defends herself. The claws are coming out!
Scott advises Ava. He has wise words for his friend.
Anna worries about Valentin. She has every right to panic.

Holly Sutton returns! This is a homecoming you will not want to miss.
Nina Reeves (Cynthia Watros) refuses an offer. Why shouldn’t she? She deserves better, right?
Ned Quartermaine (Wally Kurth) and Michael Quartermaine (Chad Duell) butt heads. This is becoming a regular occurrence.
Victor questions Trina. He may not get the answers he wants.
Curtis Ashford (Donnell Turner) has a change of heart. He needs to do some more thinking.

Carly Corinthos (Laura Wright) finds peace. Enjoy it while it lasts, Carly.
Maxie Jones (Kirsten Storms) and Sasha Gilmore Corbin (Sofia Mattsson) are concerned. They have many, many worries.
Anna and Jordan put their heads together. Will they figure out a solution together?
Harrison Chase (Josh Swickard) confides in Ned. He needs someone to listen.
Brook Lynn Quartermaine (Amanda Setton) gets an unpleasant reminder. What is about to happen to her?

Jordan makes a tough decision. It’s not an easy one but it’s necessary.
Victor is triumphant. Will the devil ever get his due?
Sasha gets news about her legal situation. She is facing a rough road.
Carly and Drew Cain (Cameron Mathison) look to the future. Does this mean they want a future together?
Holly is stunned. It’s understandable considering what’s going on in Port Charles.

Cody and Britt make a discovery. What will they find?
Elizabeth Webber Baldwin (Rebecca Herbst) and Terry Randolph (Cassandra James) embark on a journey. It’s time for Liz to heal.
Josslyn Jacks (Eden McCoy) runs into Dex Heller (Evan Hofer). Will their sparks still fly?
Victor makes a revelation. This could change the game.
Nina is curious about Ava’s intentions. What is she really up to?

Britt has a request of Sam McCall (Kelly Monaco). What is she about to ask?
Victor announces his next move. He has no reason to hide his intentions.
GH spoilers tease Cody confides in Dante Falconeri (Dominic Zamprogna). It’s nice to connect on this level.
Maxie briefs Austin Gatlin-Holt (Roger Howarth). She has news he wants to hear.
Felicia catches up with a friend. Who is she spending time with?

Spencer Cassadine (Nicholas Alexander Chavez) receives friendly visitors. Will he be glad to see them?
Trina is distracted. She needs to keep her eye on the prize.
Nina confronts Victor. This is a showdown you’ll want to see.
Mac and Felicia run into Dante and Sam. Will this be a pleasant encounter?
Brook Lynn and Chase focus on romance. They deserve some time for love.

Terry creates a distraction. She’s a good friend.
Cameron Webber (William Lipton) gives Hamilton Finn (Michael Easton) insight into Liz. No one knows Liz more than her son.
Carly makes a big decision. What is she working toward now?
Willow Tait (Katelyn MacMullen) gets a health update. Let’s hope there isn’t more bad news.
Olivia Falconeri Quartermaine (Lisa LoCicero) gets an unpleasant surprise. How will she deal with this twist?