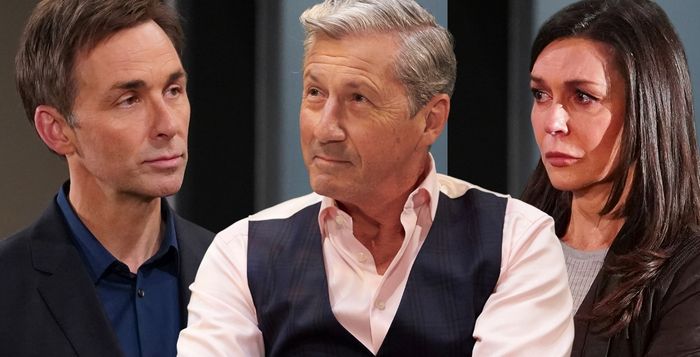 GH spoilers tease that Anna Devane and Valentin Cassadine are determined to bring down Victor Cassadine. They’ve been determined for a while now. Even before Victor absconded with wee brat Charlotte Cassadine.

Are Anna (Finola Hughes) and Valentin (James Patrick Stuart) ever going to, you know, make it happen? What over 2,000 fans are predicting will happen:

GH: How Much Time Do You Have

A little over half of the audience, 51%, do expect Anna and Valentin to win out over Victor (Charles Shaughnessey) in the end. You just expect that end to be a long time coming.

Slow and steady wins the race, we’re told, and what fun would it be if Anna and Valentin just cut to the chase? GH obviously wants us to experience every moment of the adventure. After all, didn’t Agnes Nixon say, “Make them laugh, make them cry, make them wait?” Keep waiting! You won’t want to disrespect Agnes Nixon, would you?

Piece of cake, 39% of the voters predict. Of course, Anna and Valentin will outwit Victor. The only reason it’s taking them so long now is that their attention is split. They’ve got other stuff going on — like their will they or won’t they romantic tension. That’s much more important than putting some criminal behind bars. After all, if Port Charles focused on justice, half the cast would be twiddling their thumbs in prison!

General Hospital: Over and Out

A cynical 10% has given up hope. This mystery will never come to a conclusion. Victor will continue to wreak havoc throughout the city, the state, and the world! He will always win, and the dumb folks on his trail will always lose. It’s kind of like Sonny Corinthos (Maurice Benard). In the end, the world always goes the same way. And Victor is even more powerful. He’s the international Sonny!