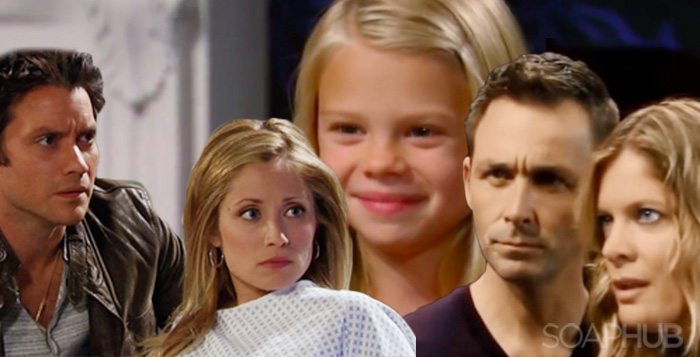 Poor Charlotte will soon be at the center of a General Hospital custody battle between her mother, Lulu, and her father, Valentin.

The sweet child has been passed from faux parent to faux parent since she arrived in Port Charles, eventually settling in with her papa, Valentin (James Patrick Stuart).

But, now that Lulu’s (Emme Rylan) discovered she’s Charlotte’s biological mother, she’s determined to fight for the right to raise her far, far away from her evil father. But is that what is really best for the confused little girl?

Soap Hub asked who should raise Charlotte. Over 5,000 of you weighed in, and here are the results.

Lulu and Dante
Nearly half of you, some 48%, believe Charlotte should be placed in the care of her bio mama, Lulu, and her devoted husband, Dante (Dominic Zamprogna). They are two of the finest people in town.

The pair would be wonderful role models for the little girl and provide a safe, loving home for her. Plus, Charlotte would get to grow up beside her half-brother Rocco.

Joint Custody
Coming in a close second, with 42% of the vote, was the option for joint custody. Although you question Valentin and everything he stands for, you realize that he is the only real parent Charlotte has ever known.

As a result, you don’t think it’s in the little girl’s best interests to totally cut him out of her life. What’s best for Charlotte is for Lulu and Valentin to find a way to make peace with each other, so they can rear their daughter together.

Valentin and Nina
The final 10% of you think Charlotte should be raised by Valentin and his new bride, Nina (Michelle Stafford). The little girl loves and feels safe with her papa; plus, she’s forged a strong bond with Nina, who totally adores her. Charlotte is already living with the duo and totally content. It would be cruel to ask her to adjust to a new parental situation.