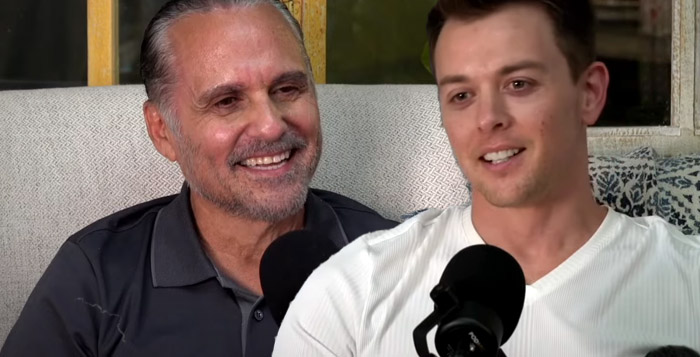 Fans of General Hospital are not going to want to miss this week’s episode of Maurice Benard’s video podcast, State Of Mind. The host welcomes, for an encore visit, his TV son and friend in real life, Daytime Emmy award-winning actor Chad Duell, as the two discuss life after heartbreak, a medical crisis, and mutual respect.

Maurice Benard And Chad Duell — The Elephant In The Room

In 2021, everyone followed the engagement, marriage, and subsequent divorce of Chad Duell (Michael Corinthos, GH) and Courtney Hope (Sally Spectra, Young and the Restless). Fans and the media were left with a case of whiplash and sadness wondering what happened to the beloved couple that seemed to have everything going for them. Benard (Sonny Corinthos) encouraged his friend to talk about how he was coping in the aftermath.

Duell openly shared his vulnerability. “It hurts, and it’s hard to just sit with yourself and choose to be single.” The actor went on to explain, “It is a decision. It is hard to do because everybody likes to have somebody, but if you know that it is going to be there when the time is right, then you try and build yourself into the man or woman that you really want to be so that when you are in a relationship you are not having, ‘what ifs.'”

There is a strategy involved in the healing process. Duell explained his. “If you enter a relationship with your heart broken, you are just filling a void, and you are going to end up hurting that person and yourself in the process, delaying your healing and hurting that person because you are not emotionally available.”

He described how. “It takes courage. It takes strength, and, at the same time, it is the right thing to do, to wake up and change the routines that kept me in the same place. When you fill your mind with distractions, you are just delaying growth.”

Another mystery solved in Benard’s most recent episode of SOM was the explanation of Duell’s recent absences from General Hospital and temporary fill-in for his character by actor Robert Adamson (ex-Noah Newman, Y&R). Duell attributed it to the long-term effects of COVID. He developed a severe case of Myocarditis, which doctors were able to diagnose and treat, but it was very painful. It made the actor face his own mortality.

“It makes you realize that if you were to die, the worst thing you can have is unrealized potential. Who you love and who loves you is all that matters,” explained Duell. “When you think that you are going to die and you are there by yourself, it causes you to reevaluate things and see what is important.”

Benard was in awe of just how much Duell has matured, in life and on the show, since his debut on the soap opera in 2010. Fans will be inspired by his healing journey, and value the life lessons learned along the way. The two discuss the new generation, respect and the lack thereof from the next generation, acting, and share behind-the-scenes tidbits about Tony Geary (ex-Luke Spencer), Steve Burton (ex-Jason Morgan), and much more.

Fans will enjoy the exchange between the two men, how they reference scenes together as a good boxing match, and maybe even gain insight into information on the two actors that they may not have known. Catch the full episode here.

All kidding aside I was really proud of @duelly87 if you can believe it he said some very profound things✝️ https://t.co/70mAnLH0sD @GeneralHospital pic.twitter.com/MmP3PNp3lH