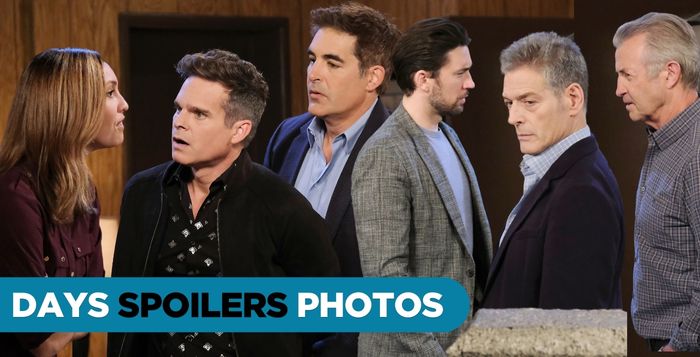 DAYS spoilers photos for Tuesday, September 20, 2022, are here! Catch a glimpse of your favorite Salemites stirring up drama. This is going to be an episode you will not want to miss.

Jennifer Horton Deveraux (Cady McClain) spends her time catering to her husband and soothing her son-in-law. It’s nice to have people to take care of. Too bad she’s not taking care of herself. Instead, she opens the bottle and considers taking another pill. Will she come to her senses before she swallows it down?

It doesn’t seem like Craig Wesley (Kevin Spirtas) takes too kindly to Clyde Weston (James Read) proposing to his ex-wife Nancy Wesley (Patrika Darbo). The men get into it in the square and don’t stop until Chad DiMera (Billy Flynn) happens upon the scene and tries to get the men to make peace.

Meanwhile, it’s quite a day for Rafe Hernandez (Galen Gering). He gets an eyeful of his sister’s new gorgeous ring but is he happy about her engagement? Does he think Gabi Hernandez DiMera (Camila Banus) is moving too fast?

Either way, that’ll have to be put on the back burner. He has a man to arrest! Rafe finally gets his hands on Leo Stark (Greg Rikaart) and cuffs him. Too bad he’s going after an innocent man.