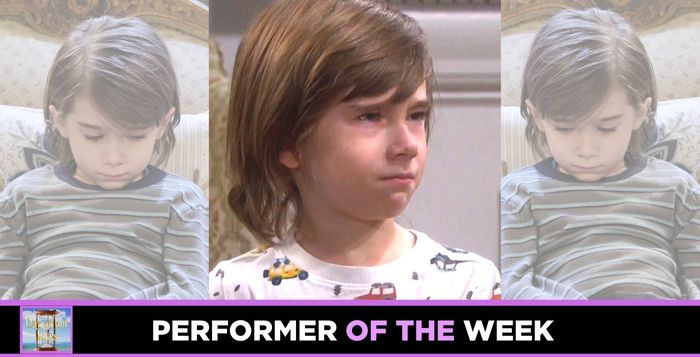 Soap Hub Performer of the Week for DAYS: Cary Christopher

Child actors are a dime a dozen, but innately talented child actors are a rare commodity indeed. DAYS has struck gold with Cary Christopher, a wee one who can make you laugh, who can make you cry, and who can run his character through a gamut of emotions that belie his years. This talented little man most certainly earned himself Soap Hub’s Performer of the Week honors.

Cary Christopher – Performer of the Week

Christopher’s alter ego is having a Hell of a time. Thomas’s mother has been murdered, his father isn’t handling the news as well as he should, he’s been relocated from the only home that he’s ever known, and one of his teeth is loose.

Still, it’s not all bad. Grandma Jennifer Horton Deveraux(Cady McClain) is ready and willing to take him to go and get some froyo – and even though that rickety molar is going to prevent him from having that desert topped with toffee, Thomas can deal.

What he can’t deal with, however, is the sudden appearance of the parent who screamed at, and later abandoned him the night previous.

Thomas tried running away and shutting Chad DiMera (Billy Flynn) out, but Jennifer talked him ’round.

But even after he agreed to return to the living room and talk it out with Thomas’s pops, Christopher used precise, skillful body language to telegraph his upset. Though he was relatively close to Flynn, Christopher kept his head downcast and turned in the opposite direction; his hands kept clasped together and stretched out in front of him.

When “Chad” began making amends, Christopher spoke in monosyllables and raised shoulders. Eye contact wasn’t established between play father and son until Chad made clear that he hadn’t been mad at Thomas when he stormed and the boy pitifully pointed out that, from his perspective, that wasn’t the case.

Chad and Thomas eventually achieved rapprochement after agreeing that they were both mad and sad in light of Abigail Deveraux DiMera’s (Marci Miller) passing and following their agreement to get one another through this rough time.

There were three moments that truly encapsulated Cary Christopher’s prowess. The first came during the aforementioned heart-wrenching scene between Chad and Thomas. Chad wondered if his boy knew just how much he reminded him of Abby, and Cary shook his head from side to side while stifling tears.

The second saw Cary tenderly reach out and stroke Flynn’s hand while explaining that Chad was going to have to start doing some of the things that Abby used to do – such as make sure his tooth found its way to The Tooth Fairy – and the third was a 180 degrees from the tear-inducing scenes from what came before it; that was Cary very matter-of-factly declaring that The Tooth Fairy owed him 50 dollars!