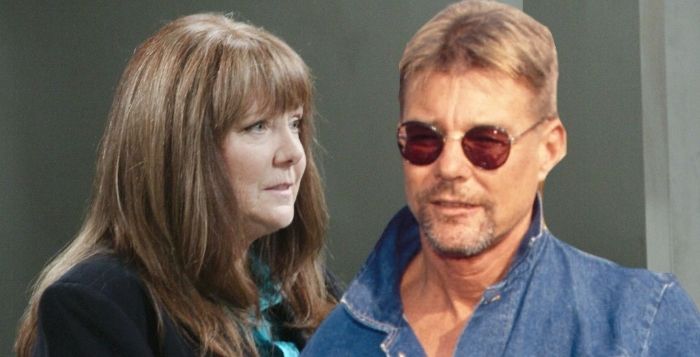 Veteran Days of our Lives fans recall Jean Bruce Scott’s run as Jessica, the love child of nun Marie Horton and ruthless Alex Marshall. The actress went on to have a successful primetime career after leaving Salem including a run as Caitlin O’Shannessy on the Jan-Michael Vincent series Airwolf. Now, she’s written an emotional tribute to the late heartthrob.

“Isn’t this a great shot of Jan and his magical smile?” wrote Jean Bruce Scott on the Jean Bruce Scott Archives Facebook Page. “This is one of my favorite scrapbook photos [seen below] from back in the mid-eighties. I can’t remember if we’re at an airshow or on location, but it looks like we’re on a beach (or maybe out at the dunes), and that’s [pilot/actor/stuntman] Peter McKernan Sr. over Jan’s right shoulder.

“It’s been three years since Jan passed on February 10, 2019, in Asheville, North Carolina,” Scott emotionally adds. “He was 74 years old and it was far too soon for him to leave us. I know he is missed by many of us.

Memories Of her Time In The Sky

“This past year, looking back on my career and my days on Airwolf has brought me a lot of joy and tears too,” the actress shared. “It was an exciting time and co-starring with Jan-Michael Vincent [as Stringfellow Hawke], Ernie [Ernest Borgnine as Dominic Santini], and Alex [Cord as Michael Coldsmith Briggs III] in Airwolf was the highlight. We had some really good times.

“I love this photo of Jan,” says Scott, who debuted as DAYS’ Jessica, Marie‘s daughter, in 1980. “He’s so relaxed and happy. This is the Jan I knew, especially when you caught him a little off guard enjoying himself, which, despite his reputation for being taciturn and sullen was actually quite often. He was shy, but that quick easy smile and those twinkling eyes on a sunny California day, say it all.

“Rest in peace, Jan,” Scott concludes. “We all remember you with so much love and fondness. And don’t worry, I know you’re somewhere smiling at all my mush! I can see it in your eyes.”

Jan-Michael Vincent began his career in the 1960s as a young actor. He had memorable roles on The Banana Splits ‘Danger Island’ series as heartthrob Lincoln ‘Link’ Simmons before appearing in the Disney movie The World’s Greatest Athlete. His other notable credits include the film Damnation Alley and the acclaimed TV mini-series The Winds of War. His last credit was the 2002 film White Boy.

Jean Bruce Scott last appeared as Jessica Fallon on DAYS in 2012. Days of our Lives (DOOL) airs weekdays on NBC. Check your local listings for airtimes. For more about what’s coming up in Salem, check out all the latest that’s been posted on DAYS spoilers, and for an in-depth look at the show’s history, click here.