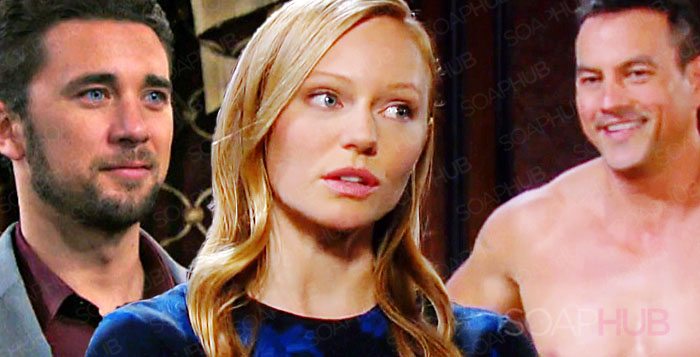 Abigail’s mental mayhem has wreaked havoc on her marriage to Chad, but is this Days of Our Lives (DOOL) supercouple destined to be over?

Things have been spiraling between the duo since Andre (Thaao Penghlis) was found dead and Abigail (Marci Miller), his surprise murderer, adopted two other personalities to cope with what she’s done.

While Chad (Billy Flynn) knows something is amiss with his wife, until tomorrow, he hasn’t a clue about how far things have gone — like the fact that Abigail’s alter, Gabby, has the major hots for his brother, Stefan (Tyler Christopher), and the feeling is mutual.

Marriage in Crisis
While Abigail remains devoted to Chad and determined to regain control of her life, Gabby is fighting tooth and nail not to be dismissed.

Gabby’s feelings for Stefan appear to be gaining strength and could eventually rival Abigail’s for Chad, even after Chad finds them in bed.

In the end, Abigail may have to find common ground with Gabby in order to survive. As Abigail and Gabby’s personalities merge, Chad could suddenly find he doesn’t have a lock on his wife’s heart. A part of it may now belong to Stefan, putting Chad and Abigail’s marriage in crisis.

The Other Man
Stefan’s already proven he’ll fight when it comes to his feelings for Gabby. He’s already locked up Marlena (Deidre Hall) to prevent the shrink from reaching Abigail and making Gabby disappear.

Plus, he has a distinct hold on Gabby as the man who accepts her for who she is and what she’s done. Some might call it a powerful obsession, others an unconditional love. Yet, no matter what it is, Gabby is mesmerized by him, which makes Stefan a viable threat to Abigail’s relationship to Chad moving forward.

A New Woman
When Abigail and her personalities are finally integrated, she’ll most likely be a new and different woman. Parts of Dr. Laura and Gabby are bound to linger inside her.

The new Abigail may be a little feistier, a little sexier and lot more unpredictable than the Abigail of old. Stefan might find her easier to understand and relate to and vice versa, which could leave Chad as the odd man out and “Chabby” a thing of the past.