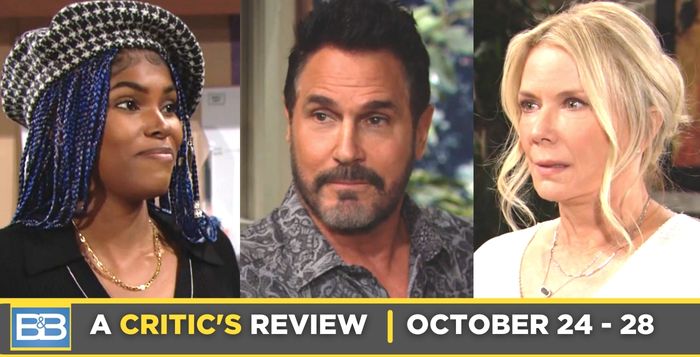 Boy oh, boy did this week’s Bold and the Beautiful leave me with a plethora of questions. Now, I could just save myself the trouble of deep diving into each one and merely ask what the H-E-Double Hockey Sticks TPTB — and you all know exactly who I mean — are thinking, but I won’t do. No, I won’t.

Instead, I’ll start with an obvious one: How does Ridge Forrester (Thorsten Kaye) expect to obtain that annulment? There was no fraud or coercion, he and Brooke Logan Forrester (Katherine Kelly Lang) are not related by blood — that we know of, but given this soap’s preoccupation with skirting the act of incest, anything is truly possible — nor was there anything being concealed at the time of the vow swap, nor was either party legal wed to another, and they most certainly were not underage at the time of deeming.

I suppose that one could argue that neither one of them was of sound mind. According to Einstein, “the definition of insanity is doing the same thing over and over again and expecting different results,” and that wedding was…what? Number six — not counting invalid/interrupted attempts which I do believe brings the total to 11.

* How can Taylor “World Renowned Psychiatrist” Hayes (Krista Allen) justify being with a man who admittedly chose her on a whim after he was struck on the head by a falling pinecone? Surely if a patient disclosed a story like that, Taylor would advise them to do some soul searching…surely?!

* Where did get Deacon Sharpe (Sean Kanan) get that ring he used to propose to Brooke? His speech seemed to imply that he’d been in possession of it at least as long as he has been out of prison, but that doesn’t exactly track now does it?

* When did stuffing one’s hair down into the neck of a sweater becomes a fashion trend/statement? Oh, that’s right, it didn’t. Someone tell Jacqueline MacInnes Wood — Bold and Beautiful’s Steffy Forrester Finnegan — to cut. It. OUT!

* Where does anyone get off calling that blue gown Hope modeled, “breathtaking?”

* Why didn’t someone, anyone take that Hope mannequin and reduce it to ash? Or, did they, and we’re looking at daytime’s answer to Tiffany Valentine?

* Why is it that The Bold and the Beautiful’s Wyatt Spencer, and his portrayer, Darin Brooks, continue to get the short end of the stick?

* Had it been anybody else who so readily shared a confidence, I’d be furious, but given that it was prim and proper, perfect and perky Paris Buckingham (Diamond White), I’m going to let it slide. And for all of you who can’t detect sarcasm: sarcasm!

* When I think of the beach house, and the time that Taylor and Ridge spent there, I remember less, “magic,” and more Taylor contracting tuberculosis from The Riddler and that time the two tried to marry and the officiant declared them, “Man and…horse?!”