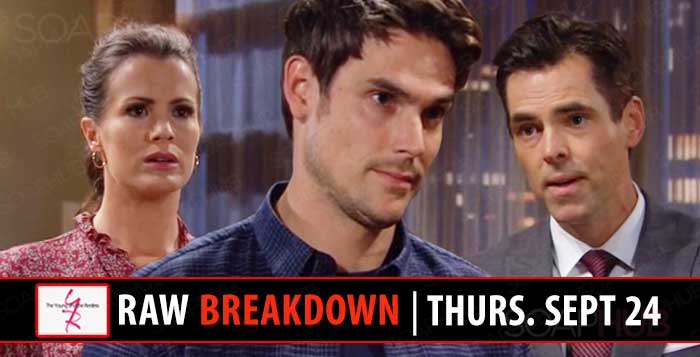 The Young and the Restless Spoilers September 24 2020

The Young and the Restless spoilers raw breakdown for Thursday, September 24, 2020, reveals Billy going after Adam, Devon’s actions speaking louder than words, and Summer getting a reality check.

Adam’s (Mark Grossman) in hot water when Billy (Jason Thompson) bangs down his door. Where is Alyssa? What did he do? Adam claims innocence. He did not even know Alyssa was in town. That does not go over well with Billy. No Adam, produce the journalist, or else.

Chelsea (Melissa Claire Egan) walks into the war zone and immediately puts her foot down. How dare Billy come into her house with his schemes, scams, conspiracy theories, and lies? Go ahead and publish it all, big man, you’re just hurting yourself, she says.

Once alone, though, Chelsea questions her man. Did he do something to make Alyssa disappear? Fans may be shocked by his answer and the truth about where Alyssa really is.

Be There For Me

Devon (Bryton James) thanks his girlfriend for standing by his side, not realizing how bitter she really is. Nevertheless, Devon overshares about Hilary and makes things awkward for Elena (Brytni Sarpy). He tries to reel it in and say this stuff with Amanda has shown him that he’s truly moving forward. Elena smiles and hugs him but she’s not buying it.

And she is right. Once alone, Devon takes a trip down memory lane and reminisces about the highs and lows of being with Hilary. Get your popcorn ready for flashbacks of their love story, her pregnancy announcement, and her death.

Nate Tries To Make It All Better

As for Amanda (Mishael Morgan), she’s with Nate (Sean Dominic), expressing her gratitude for this twist in her life. She did not realize how much she needed the family connection until she got it, even if it is too late.

Amanda leaves seconds before Devon’s moody girlfriend comes in. Elena unleashes on Nate for no reason and goes into a tirade about her and Devon’s life turning upside down. She then storms out to start her shift.

Nick Has His Say

Over at the Grand Phoenix, Nick (Joshua Morrow) goes off the rails about Summer’s (Hunter King) engagement. He’s not alone. Phyllis (Michelle Stafford)  is right there with him. She’s panicking too but does her best to find a happy medium for father and daughter. Nick may be mad about the engagement but there is nothing anyone can do. The Young and the Restless (YR) airs weekdays on CBS. Check your local listings for airtimes.