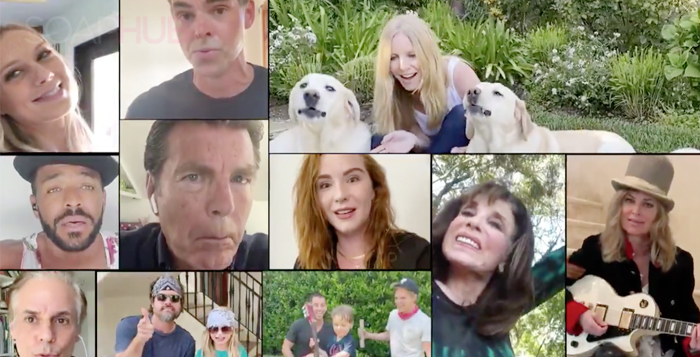 The Young and the Restless Stars

Many things have changed on The Young and the Restless over the decades, but one thing has remained the same — the show’s trademark opening theme, sometimes called Nadia’s Theme. Now, many of the show’s cast members have gotten together to record a new version of the song released on social media.

The Young and the Restless Stars Make Beautiful Music

The show’s official Twitter handle reported that “Some of the #YR stars volunteered to make their own rendition of our iconic theme song, and we might love it just as much as the original! Red heart Give them a round of applause.”

The YR theme is called Nadia’s Theme in honor of Olympic gymnast Nadia Comăneci. While the famed gymnast never performed a routine to the tune, ABC scored a video package featuring her routines to the music. The song was composed by Barry De Vorozn and Perry Botkin for the 1971 feature film Bless the Beasts and the Children.

On YR, Gina (Patty Weaver) has sung lyrics to the song. In this version, both Davidson and Dominic display their guitar skills and Jason Thompson (Billy) is a standout with his vocal skills. There are some guest stars in this video including Joshua Morrow’s (Nicholas) daughter Charlie Jo, Melissa Ordway’s (Abby) husband Justin Gaston (ex-Ben, Days of our Lives), who was also on guitar, and Greg Rikaart’s (Kevin) husband Robert Suddath and their son, Monty. Bell’s dogs appear in the video, too!

You can check out the video below. Which star was your favorite in this musical number? Sound off in the comments below. The Young and the Restless airs weekdays on CBS. Check local listings for air times.

Some of the #YR stars volunteered to make their own rendition of our iconic theme song, and we might love it just as much as the original! ❤️ Give them a round of applause 👏 pic.twitter.com/1H3cxwfemf