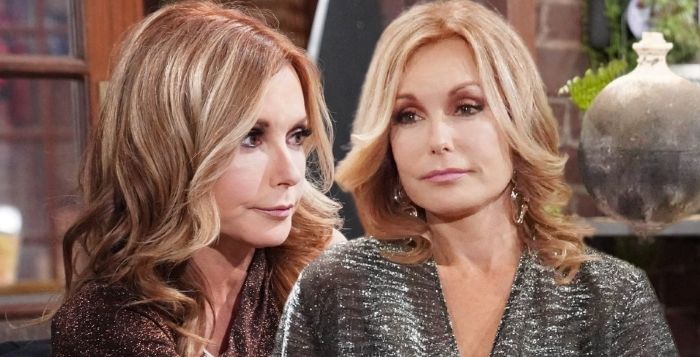 The Young and the Restless Lauren Fenmore Baldwin

When it comes to The Young and the Restless, every fan has their own opinion – and Soap Hub is no different. For a week we sat and watched the good, the bad, and everything in between, and now we offer you a handy review, and a cheeky critique, of YR’s week that was.

It’s quite possible, that Lauren (Tracey E. Bregman) has undergone the greatest growth of any character on this soap. She’s evolved from a shoplifter, a bully, a public brawler, and a homewrecker to a respected businesswoman who can actually claim, with a straight face, that catfights, gossip, and blackmail have no place in her domain.

And kudos to her insistence on women supporting and uplifting one another – especially in the work place. Female rivalries are all fine and dandy, but it would be nice to have more female friendships in the daytimesphere…especially since the one between Lauren and Phyllis (Michelle Stafford) seems in danger of ending.

Is it too much to hope that we’ve witnessed the true end of this pathetic Summer (Hunter King)/Sally (Courtney Hope) feud? And please say that the plug has not been pulled on the budding Jack (Peter Bergman) and Sally romance. “Jack The Lad” has done a plethora of things just as wild and crazy – and hurtful – as Sally. Let’s hope that hypocrisy doesn’t rear its ugly head.

* Alyvia Alyn Lind, we will miss you terribly. And it’s such a shame that you’re leaving us right as the show is poised to give Faith her first real romantic interest…

* And speaking of Moses (Jacob Aaron Gaines), has he made, or had any, contact with Lily (Christel Khalil)? Surely his (supposed) family centric sister would have reached out by now. Or is she far to busy attempting to keep Billy (Jason Thompson) in check and Victoria (Amelia Heinle) as far away from her business – personal and otherwise – as possible?

* What do you think has been the hardest thing for Rey (Jordi Vilasuso) to swallow as of late – his wife’s continued involvement with the man accused of poisoning him, the explanation she’s now proffering, which concerns a complete paraplegic actually committing the crime, or the fact that he actually has to thank Adam (Mark Grossman) for rescuing his step-daughter?

* Kyle (Michael Mealor) finally stepped up and took some responsibility for his actions – and it seems that his efforts are going to result in Ashland (Richard Burgi) taking over Jabot. Smooth move kid!

* Amanda’s (Mishael Morgan) story has potential, and in light of spoilers revealing that she’ll be going toe to toe with Victor (Eric Braeden) in the coming week, we welcome any and all new developments. Our humble request: reintroduce Imani (Leigh-Ann Rose) into the mix.