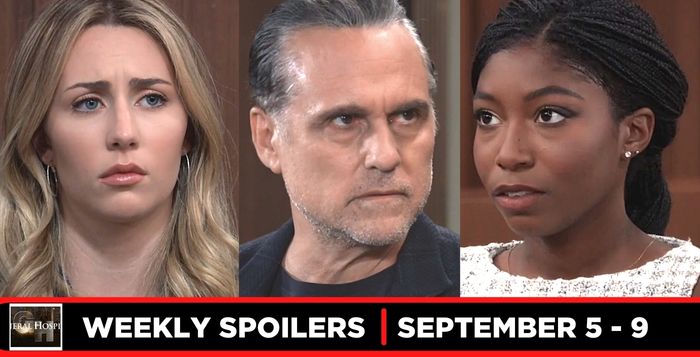 The GH spoilers for September 5 – September 9, 2022, tease a love committed to paper, a verbal smackdown, sparks flying, and so much more. This will be a week you won’t want to miss!

Spencer Cassadine (Nicholas Alexander Chavez) puts his feelings for Trina Robinson (Tabyana Ali) down on paper and steels himself to hand it directly to her — but as soon as he’s plucked up the courage, Trina comes at him with all guns blazing! The takeaway from the fiery confrontation: she doesn’t want anything more to do with him — EVER!

In his shock, Spencer loses custody of his missive, and by the time he notices that it’s gone and retraces his steps, he finds that it has reached its intended recipient.

Dex Heller (Evan Hofer) proves himself invaluable to Josslyn Jacks (Eden McCoy) yet again when he braves the inside of a dumpster to help her retrieve one of Avery’s MIA bracelets.

Expect the interaction to crackle with tension — sexual tension, that is — and don’t expect Josslyn to be honest with Cameron Webber (Wiliam Lipton) about her latest interaction with Sonny Corinthos’s (Maurice Benard) new number two.

In other GH spoilers news, Nina Reeves (Cynthia Watros) is forced to reckon with her past, Willow Tait’s (Katelyn MacMullen) anxiety manifests in vivid nightmares, Sonny and Victor Cassadine (Charles Shaughnessy) clash, and Sasha Gilmore (Sofia Mattsson) gets more bad news. Will this poor woman ever get a win?!

Meanwhile, despite formerly being a member of team ‘ChaLynn’ — Ned Quartermaine (Wally Kurth) now has reservations about his daughter’s new relationship. Wouldn’t it be fun — and a massive twist — if Ned’s actual objection is that Harrison Chase (Josh Swickard) is too good for trainwreck Brook Lynn (Amanda Setton)?

Finally, GH spoilers have Cody Bell (Josh Kelly) trying to become a friend to Selena Wu (Lydia Look) rather than one of her many — easily disposable — enemies. Good luck, mate!