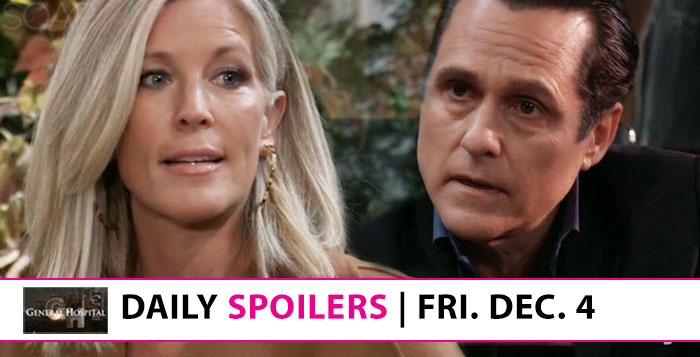 General Hospital spoilers for Friday, December 4, 2020, reveal understanding, compassion, anger, and so much more. You won’t want to miss an emotional moment of this new episode.

Carly (Laura Wright) is furious with Julian (William deVry) after she’s read in on everything Sonny (Maurice Benard) and Jason (Steve Burton) have learned. She lets loose at both her husband and BFF, trying to elicit a promise that they’ll make Julian pay. But seeing as Sonny is playing chess and Carly’s playing checkers, will he explain why Julian is needed alive?

Nikolas (Marcus Coloma) is shocked by his wife’s news that Julian’s dead and asks Ava (Maura West) what made her want to kill her brother. Will she really tell him that he’s to blame for his little sister having almost been killed in the bomb blast? Spoilers reveal that Ava and Nik come to a mutual understanding but does that mean he has all the information?

Will Trina Spill All?

Trina (Sydney Mikayla) has important information — and she wants to tell Joss (Eden McCoy), but she makes her friend promise not to tell anyone. Yet if she confides what Cyrus said about her dad, will Joss really be able to keep from telling her mother — who already knows the truth? That could get awkward.

Nina (Cynthia Watros) was affected by Valentin’s (James Patrick Stuart) change of heart towards Lulu (Emme Rylan) and is compassionate about how things have turned out. That’s a warning sign for her current beau, so Jax (Ingo Rademacher) asks if that means she’s forgiven Valentin for all that he’s done to her in the past. Has she?

Are Willow And Michael Meant To Be?

Willow (Katelyn MacMullen) and Michael (Chad Duell) are no longer operating with a lack of information — they know they were manipulated into this marriage by those who loved them the most. But something did happen between them and they need to discuss their relationship. Willow suggests it’s time they face the truth. So…. what is that truth?

Meanwhile, Chase (Josh Swickard) approaches Britt (Kelly Thiebaud) and asks her to clear up a couple of things for him while the last of the foursome, Sasha (Sofia Mattsson), is furious with a visitor, asking how could they do that! So who has the recovering model’s ire? General Hospital (GH) airs weekdays on ABC. Check your local listings for airtimes.