General Hospital fans know one thing about the mysterious Sasha: She’s working with Valentin and she is NOT Nina’s long-lost daughter.

The two facts actually go hand in hand. Valentin (James Patrick Stuart) hired Sasha (Sofia Mattsson) to pass herself off as the baby Nina (Michelle Stafford) had stolen from her while she was in a coma.

He wanted to play the hero for his estranged wife — and maybe get her to back off a little from her obsession with his daughter, Charlotte (Scarlett Fernandez).

So whose offspring is Sasha, really? Could her biological mother be…Liesl Obrecht (Kathleen Gati)?

Face the Facts
Let’s take a look at the evidence: Liesl is Nina’s aunt, which means they might be biologically related enough to get a true match on a DNA test.

And Sasha definitely looks like Liesl’s known biological child, Britt (Kelly Thibaud). In fact, she looks so much like ‘Britta’ that, at one point, fans wondered if Britt might be Sasha’s mother, though the age would have to be tight.

(Then again, this is the show that revealed Claudia to be the biological mother of her “brother,” Johnny, and they looked to be about the same age, so clearly, it’s not a major concern for The Powers That Be.)

Heck, even Nina pointed out how much Sasha looks like Britt when she pushed for Liesl to meet the young woman. And Liesl certainly pushed back.

More Ties
Liesl also responded quite strongly when it was suggested that Sasha bore a striking resemblance to her late son, Nathan (Ryan Paevey). Liesl gave Nathan to her sister, Madeline (Donna Mills) to raise, to protect the boy from Faison (Andres Hove).

She could have also given Sasha away – and for the same reason. Nathan was raised by Madeline, so it’s entirely possible that she knew about Sasha, too, and used that info to set it up to make it look like Sasha was Nina’s missing child.

This is just speculation, but you never know. What do you think? We guess time will tell… 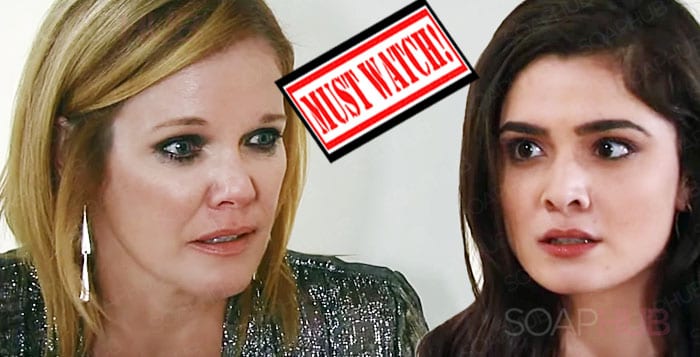