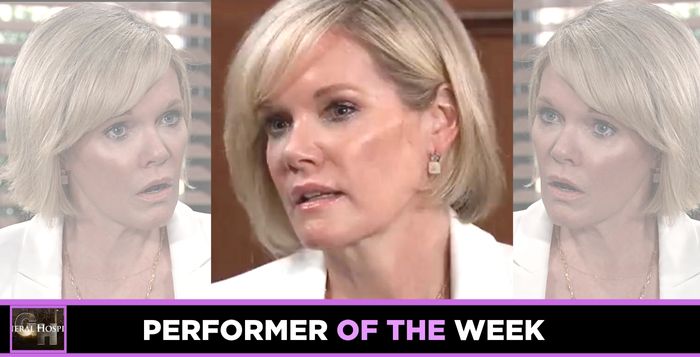 Soap Hub Performer of the Week for GH: Maura West

We weren’t sure how long it would take for the secret of Nikolas Cassadine and Esme Prince’s one-time affair to come to light on General Hospital. However, we felt certain that once Ava Jerome learned of her husband’s infidelity that, her portrayer, Maura West, would deliver a powerful performance. For her stunning portrayal of a wife betrayed, Soap Hub bestows Performer of the Week honors upon West.

If Nikolas (Marcus Coloma) was hoping that his wife would give him points for confessing his fling with Esme (Avery Kristen Pohl), he was sadly mistaken. The more Nik explained what happened with his son’s girlfriend, the more incensed Ava became. After Esme lit the fuse outside the courtroom, Ava and Nikolas found a private room where the fireworks exploded.

Even before Nikolas confessed his affair, Ava had grown very suspicious. Once Nik came clean, Maura West made the choice for Ava to close her eyes for a brief moment and then, she opened them, glaring at Nikolas, ready to blast him for his betrayal. “Stop talking!” Ava commanded as she proceeded to ask Nik how often he was sleeping with Esme. After he said it was just once, Ava coldly quipped, “How noble and restrained of you.”

Maura West knows how to shift her tone and demeanor for heartfelt and vulnerable to angry and accusatory in a heartbeat. Nikolas tried to thrust the blame onto Esme and while Ava knows that Esme is manipulative, she sarcastically shot back, “Poor you. Seduced by a high school graduate!” Tears in her eyes, smudged mascara, there was no mistaking that Ava was truly, deeply hurt by Nikolas’s betrayal — but the main emotion West had her character convey was unbridled anger. “I thought I married a man — you are no man,” Ava informed Nikolas before informing him that she was going to burn him to the ground!

Ava didn’t waste any time after tracking down Esme, who was packing to leave town. Ava called the seductress a ‘lying little whore.’ The writers armed both characters with information to make this showdown raw and heated — that kind of showdowns that make soaps great. And let’s not forget to give major props to Avery Kristen Pohl’s Esme. Watching her and Maura West go back and forth with one another is like watching a great tennis match — it only works if both players know how to hit the ball.

Ava was briefly stunned when Esme threw up in her face her ‘hate sex’ with Sonny Corinthos (Maurice Benard) that led to the conception of Avery — all while she was also sleeping with Sonny’s son Morgan Corinthos (Bryan Craig). Ava gave Esme props for being so conniving but hastened to point out that she’s demented and psychotic, accusing her of framing Trina Robinson (Tabyana Ali) along with seducing Nikolas.

Esme shot back that Ava’s treatment of Nikolas set him up to fall and she was only too happy to catch him once he took a tumble. She also pointed out that Ava walked out on Julian Jerome (William deVry) in his final days. Rather than have Ava crumble over this painful reminder, Maura West played a realization that was afforded her character by the show’s writers; Ava realized that Esme has to be more than her stepson’s psycho girlfriend — she must have a personal reason for going after her as she knows all these personal details.

Esme tried to throw Ava’s focus back onto her cheating husband, which only confirmed to Ava that she was on the right path. “Oh, my,” Ava said just before the show cut to another storyline. “I seemed to have pushed a button. Let’s see if I can push a few more.”

Maura West gives scene-ending tags like nobody else. When the action returned to these two, Ava put the issue of Esme’s fling with Nikolas aside; she informed the vixen that she was going to go to the courthouse and exonerate Trina. Not surprisingly, Esme balked at that suggestion. Next, West reminded viewers of the Ava who murdered Connie Falconeri (Kelly Sullivan) in cold blood and got away with it. “Oh, darling girl,” Ava softly said. “You misunderstand me. If you don’t admit that you framed Trina, I will make sure that nobody ever finds you — at least not while you’re still breathing.”

Kudos to West for delivering such dynamic work. These two episodes should be considered for her Daytime Emmy reel next year. The actress has three ‘Golden Girls’ and may very well have earned her fourth with this particular series of performances.

Honorable Mention: In addition to West and Pohl, we have to give props to the always-terrific Eden McCoy. Last week, we saw her character, Josslyn Jacks, go up against her stepfather Sonny Corinthos (Maurice Benard). McCoy continues to show that the apple doesn’t fall far from the daytime tree as she more and more reminds us of TV mom Laura Wright (Carly). And kudos to Carolyn Hennesy who, as Diane Miller, gave a Camille Vasquez-worthy performance in court as she handled Trina’s defense. Maura West’s Ava wasn’t the only one who went after the bad seed last week. Diane did her best to rip Ms. Prince to shreds on the witness stand.