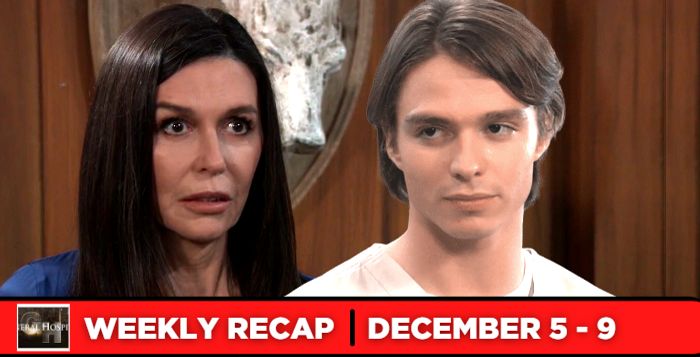 The General Hospital recaps for December 5 – December 9, 2022, sees several blanks being filled in, several truths are left unsaid, and so much more.

Felicia Scorpio (Kristina Wagner) let slip to Laura Collins (Genie Francis) and Valentin Cassadine (James Patrick Stuart) that there’s more to Holly Sutton’s (Emma Samms) story than meets the eye. Laura makes a beeline to Robert Scorpio’s (Tristan Rogers) office — where he admits that Holly is well and mounting a mission to rescue Ethan Lovett (Nathan Parsons) and that he’s in possession of the necklace that contains cuttings from the Ice Princess — while Valentin remains behind with Felicia. Felicia admits to Valentin that Lucy Coe (Lynn Herring) is alive. He implores her to confide Anna Devane’s (Finola Hughes) location; she does just that.

Josslyn Jacks (Eden McCoy) briefly hides when Sonny Corinthos (Maurice Benard) calls on Dex Heller (Evan Hofer) but emerges when Dex is pressed to reveal who sheltered him in his time of need. Sonny rails at his underling for conscripting Josslyn, but Dex swears Josslyn took it upon herself… Britt Westbourne (Kelly Thiebaud) set about planning a blowout birthday bash. Austin Gatlin-Holt (Roger Howarth) fears Britt plans to end her life post-celebration, but she assures him otherwise. Austin cautions Britt against keeping her advanced illness from friends and family.

Michael Corinthos (Chad Duell) tried to convince Willow Tait (Katelyn MacMullen) that it was time to publicly acknowledge her cancer diagnosis. Willow, in turn, worked to convince Michael to drop his vendetta against Sonny. Michael attempted to end his association with Dex but was rebuffed… Carly Spencer (Laura Wright) is chagrined to hear that Drew Cain (Cameron Mathison) has tracked down a member of the commune that Lorraine Miller was a part of, and that they’re willing to talk; she requests that Olivia Falconeri Quartermaine (Lisa LoCicero) give her a heads up when the woman shows.

Curtis Ashford (Donnell Turner) personally delivers a save-the-date card for his and Portia Robinson’s (Brook Kerr) wedding to Jordan Ashford (Tanisha Harper). The ex’s convo sours when Jordan refuses to offer any insight into The Hook case… Marshall Ashford (Robert Gossett) is unperturbed when Portia proffers that his schizophrenia diagnosis might not be accurate.

Hamilton Finn (Michael Easton) and Alexis Davis (Nancy Lee Grahn) bandy about the theory that Esme Prince (Avery Kristen Pohl) is The Hook and Finn intuits that Esme might be hiding out on Spoon Island… Esme delights in challenging Elizabeth Webber’s (Rebecca Herbst) perceptions of Nicholas Cassadine (Marcus Coloma)… Jeff Webber (William Moses) warns Heather Webber (Alley Mills) away from his family, then heads to GH in the hopes of running into Liz. He does so… Finn arrives at Wyndemere much to Nicholas’s consternation.

Though Rory Cabrera (Michael Blake Kruse) can’t wait to mark their three-month dating anniversary, Trina Robinson (Tabyana Ali) isn’t so inclined… Cyrus Renault (Jeff Kober) presents Spencer Cassadine (Nicholas Alexander Chavez) with a gift for him and his ladylove; Spencer declines it, as he’s under the impression that Trina is better off without him. Victor Cassadine (Charles Shaughnessy) pays Spencer a visit and isn’t thrilled to see him associating with Cyrus.

Victor has news for Spencer: he’s being sprung from Pentonville earlier than expected. The one rub? The two of them will be moving into Wyndemere… Finn opines to Nicholas that Spoon Island would make the perfect hideout for Esme and that the area should be thoroughly searched, by the PCPD. Nicholas goes to great pains to assure Finn that Esme is nowhere near… Jeff begs Elizabeth for a chance to make things right between them, but she can’t see the two of them ever reconciling.

Laura, Robert, and Felicia try to suss out Victor’s interest in the cuttings from the Ice Princess… Valentin and Anna reunite. Someone tracks the couple… Britt books The Haunted Star for New Year’s Eve and invites Terry Randolph (Cassandra James) — and her beau — to her birthday party. The two reflect on their partnership at GH and their budding friendship. Britt intimates that Terry will soon be the hospital’s sole Chief of Staff… Cody Bell (Josh Kelly) tells Sam McCall (Kelly Monaco) and Dante Falconeri (Dominic Zamprogna) that he’s planning to leave town. Cody and Dante discuss their mysterious past.

Sonny visits Heather and convinces her to keep mum about what she saw the night of her stymied return to D’Archam… With Ava Jerome Cassadine (Maura West) in his sight line, Ryan clues the police to the fact that Esme didn’t pen the letter attributed to The Hook… Heather lets herself in Ryan’s room and addresses him as her lover!

In an effort to keep Spencer and Victor from crossing paths with Esme, Nicholas refuses to allow the two to move into Wyndemere… Anna and Valentin are not amused to find Martin Grey (Michael E. Knight) lurking outside her safe house. They’re equally unamused by the sudden appearance of Agent Whitten (Mike Peebler) whom Anna is forced to KO so that she and Valentin can abscond into the night.

Liz and Finn debated whether they could possibly make a real go of it in light of all that transpired… Rory treated Trina to a meal at The Port Charles Grill; they make tentative plans to spend Christmas with his family. Spencer and Victor arrive at the restaurant just in time to hear Rory declare his love for Trina.

Trina tries and fails to get across to Spencer her true feelings for him… Finn makes note of the prenatal vitamins that Liz has fetched for Esme, remembers spying on a similar prescription at Nicholas’s abode, and asks for an explanation… Nina Reeves (Cynthia Watros) tries and fails to make inroads with Josslyn who draws parallels between herself and the woman standing before her… Heather and Ryan — who’s dropped the pretext of being locked in — recall the time they spent as a couple; he admonishes her for keeping mum about her resulting pregnancy.