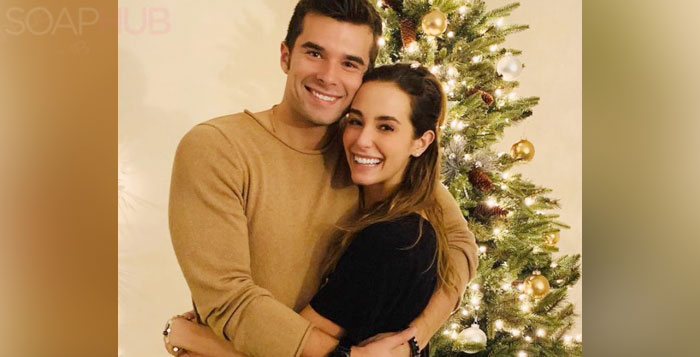 Josh Swickard and his wife Lauren are collaborating on another big project. No, it’s not another movie! The General Hospital actor and his screenwriter wife are expecting their second baby!

Swickard, who plays Harrison Chase, made the announcement on social media. “WE ARE HAVING ANOTHER BABY!!!!!!” the actor exclaimed in an Instagram post. “Feeling so grateful to be on this journey again. #2under2.” Swickard and his wife Lauren are already parents to daughter Savannah Kaye Swickard, who was born on April 21, 2021. As Lauren is likely to deliver before next April, the Swickard parents will indeed have two children under the age of two years old, a reference to Swickard’s hashtag.

The actor’s GH castmates and other daytime pals weighed in with congratulatory messages for the Swickards. “CONGRATS YOU GORGEOUS PEOPLE!!!!!,” posted Chloe Lanier (ex-Nelle Benson). Courtney Hope (Sally Spectra, The Young and the Restless) wrote: “Congrats!!!” Cameron Mathison (Drew Cain) opted to let emoticons, in the form of 10 consecutive heart symbols, express how he feels.

Like characters in the “feel good holiday movie” genre, Josh and Lauren’s characters don’t face the kind of obstacles that Harrison Chase does on GH. “These types of movies are about relationships,” Lauren has told Soap Hub. “There’s always conflict, but when you love somebody, the conflict is never too much to handle. It’s about focusing on how much these characters love each other and [how] they can get through anything because of the love they have for one another.”

Soap Hub sends sincere congratulations to the Swickards on their upcoming bundle of joy.