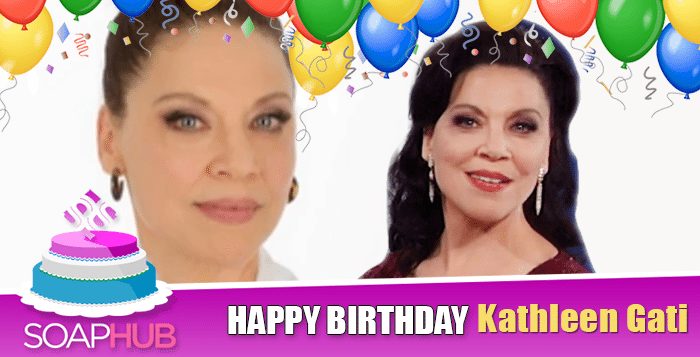 General Hospital’s Liesl Obrecht is truly a one-of-a-kind woman. She is conniving and duplicitous, yet extremely witty, and she possesses a flair for comedy that can diffuse any situation. Her portrayer, actress Kathleen Gati, is also one-of-a-kind and has a very special milestone in need of some recognition.

And that’s because she was born on August 13, 1957, in Montreal, Quebec, which means that this talented actress is turning 65 years old today! Upon graduating high school, Gati moved to New York to pursue her dream of becoming an actress.

Once firmly ensconced in the Big Apple, Kathleen Gati began successfully auditioning for and appearing in, multiple theatrical productions both on and off-Broadway. In 1981, she appeared (as an extra) in her first feature film: Abel Ferrara’s exploitation thriller Ms. 45.

Subsequently, she could be seen in a plethora of late 1980’s features including Heaven Help Us, Forever, Lulu, Mr. Universe, and Creating Rem Lezar. Between 1989 and 1990, Gati had a recurring role on the ABC daytime drama All My Children.

In 1992, Kathleen Gati was invited to Hungary in order to star in the big-screen effort Goldberg Variations. For her work, Gati won the Hungarian Best Supporting Actress Award. In response. Gati remained in Hungary for several years, during which time she starred in multiple films, television programs, and made-for-TV movies.

After her return to the U.S., Gati continued to act – wracking up a number of big and small screen credits. On August 24, 2012, Gati made her General Hospital debut. Though Liesl was only intended to be a one-episode and done character, Gati so impressed the writers and producers of the soap that they continued to write for her.

Gati is the daughter of Hungarian immigrants Laszlo and Agnes Gati, a symphony conductor and an opera singer respectively. She has been married to Michael Browers since April 17, 2012.

Soap Hub would like to wish Kathleen Gati a very happy birthday and you can too by clicking on the Twitter link below. General Hospital airs weekdays on ABC. Check your local listings for airtimes.