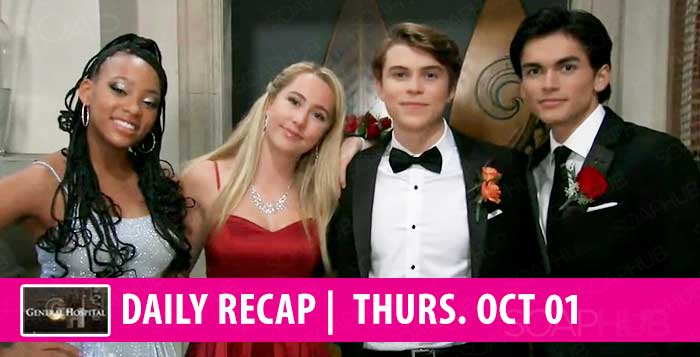 The General Hospital recap for Thursday, October 1, 2020, features the teen set wrestling with their emotions, Cyrus continuing to defend himself, a panicking Julian running amuck, and Ava receiving a blast from her regrettable past.

While the dapper young gents and the adults anxiously waited in the living room, Josslyn (Eden McCoy) and Trina (Sydney Mikayla) continued to beautify themselves upstairs.

When the girls finally made their descent, Cameron and Dev were obviously smitten which in turn tickle the assembled adults. Each parent took a private moment with their child then sent them on their way to the limo.

Portia and Liz bid the group adieu and headed for the Haunted Star as they will be chaperoning the dance. Brando also made his exit leaving Carly, Jax, and Nina (Cynthia Watros) on their own to discuss the hunt for the latter’s missing child.

Aboard the Haunted Star, Trina’s emotions got the best of her and she insisted that she must leave. While she and Dev set off in search of Josslyn and Cameron, the teens in question were leaning in for a kiss!

The World Is Against Cyrus Renault

Having already apologized to Brando for the unsanctioned beating he received, and insisting that he accept a free car lift as recompense, Cyrus is again forced to claim innocence where Neil’s (Jeff Kober) death is concerned. But Sam (Kelly Monaco) isn’t buying his innocent act. And she isn’t pleased to see him conversing with Julian (William deVry) either.

But Julian has more to worry about than Sam’s condemnation. He’s got to figure out exactly who Nelle (Chloe Lanier) entrusted with her oodles of blackmail material. And as he is wont to do, Julian turned to Ava (Maura West) for support.

Luckily, his interruption couldn’t have come at a better time. Ava was this close to engaging in yet another kiss with Nikolas (Marcus Coloma)…and we all know what happened the last time those two kissed!

Nikolas, however, wasn’t too happy with Julian’s arrival. Nor was he thrilled with the Jerome siblings attempting to shut him out of his own living room. But before he and Ava could engage in another fight, she received a collect call from Ryan Chamberlain. General Hospital airs weekdays on ABC. Check your local listings for airtimes.