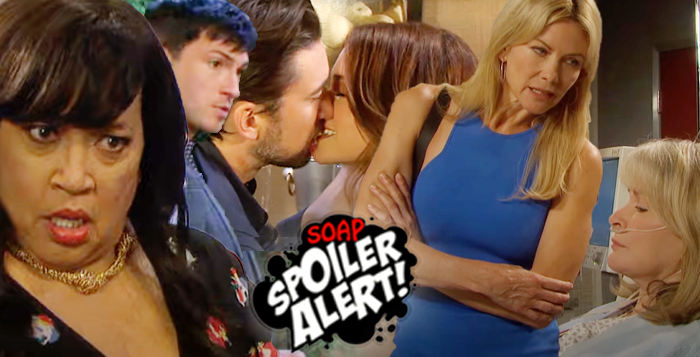 Chad DiMera is moving on from Abigail Deveraux DiMera, and there’s a potential cure for Marlena Evans Black, Kayla Brady Johnson, and Kate Roberts, but at what cost and from whom? The DAYS spoilers promo teases that the drama intensifies on all fronts. Plus, Nancy Miller runs into someone from her past.

Here’s your Days of our Lives spoilers video preview for the week of October 3 – October 7, 2022. It’s filled with an unexpected return – Roark Critchlow as Mike Horton and a surprise kiss. Plus, someone emerges as a potential savior for the ailing Marlena (Deidre Hall), Kayla (Mary Beth Evans), and Kate (Lauren Koslow).

A pair of old friends – actually, that should really be “frenemies” considering their tumultuous past – bump into each other in Horton Square. “Oh my God. Mike Horton,” says Nancy (Patrika Darbo), when she sees the former Salem University doctor.

While Nancy greets him with a smile, Mike doesn’t look all too happy to see her. Aside from their history, it looks like something else could be up.

Meanwhile, after saying a heartbreaking goodbye to Abigail (Marci Miller) in a touching fantasy sequence last week, during which she urged her grieving husband to move on, Chad (Billy Flynn) heeds her advice. He takes his first step when he makes an unexpected move on Stephanie Johnson (Abigail Klein).

“I should try being with someone else I already like a lot,” says Chad. Then he leans in and gives Stephanie a kiss. It turns out she’s not the only one surprised by the impromptu lip lock. So is Alex Kirkiakis (Robert Scott Wilson), who just happens to be walking by and witnesses it.

Days of our Lives: They’ve Got Problems

Last but not least, Marlena, Kayla, and Kate’s (Deidre Hall) medical woes continue. The trio has a bio-toxic poison in their systems that’s causing a rare deadly infection in each of them, and it’s the handiwork of the dastardly Orpheus (George DelHoyo).

Rex Brady (Kyle Lowder) may have a way to save the ailing women. “The orchid can produce a cure,” he tells John Black (Drake Hogestyn). “However, that orchid is now extinct.”

Days of our Lives Spoilers: Who’ll Save the Day?

Or is it? It looks like Kristen DiMera (Stacy Haiduk) actually has one of those extinct orchids in her possession, and she waters it to keep it thriving. Knowing Kristen, she’s likely going to use the miracle plant to her advantage. Doesn’t she always?

Later, Kristen ends up at Marlena’s bedside in the hospital. “Good luck with the orchid, honey. It would be a shame if you were to die,” she whispers. It looks like Kristen may hold the fate of Marlena, Kate, and Kayla in her devious hands. See it all for yourself in the video promo blow.