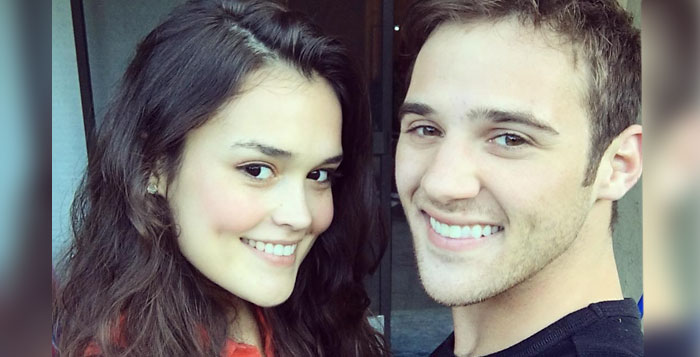 Paige Larson (True O’Brien) is living in that great soap opera in the sky and JJ Deveraux (Casey Moss) is off the canvas in Salem but their portrayers, torn apart on-screen, are facing a very different future in real-life. Soap Hub’s got the scoop on the exciting news for the two Days of our Lives alumni.

O’Brien and Moss are engaged to be married! Both are sharing a video on their respective Instagram pages that show the couple overlooking the ocean. As you can see in the video post below, Moss gets down on one knee and O’Brien gets understandably emotional over her fiance’s proposal.

Each posted a quote from the late Robin Williams character Sean Maguire in the film Good Will Hunting. The quote reads: “People call these things imperfections, but they’re not. Ok, that’s the good stuff. And then we get to choose who we let into our weird little worlds. You’re not perfect, sport, and let me save you the suspense; this girl you meet, she’s not perfect either. But the question is whether you’re perfect for each other.”

True O’Brien won the Daytime Emmy for Outstanding Younger Actress in 2016. Casey Moss was nominated in 2018 for Outstanding Younger Actor. She left DAYS in 2015, making guest appearances in 2017 and 2020. He left the NBC soap in 2020. In 2018, she filmed a role in Taco Bell: Web of Fries. Post-DAYS, Moss shot a role in the film The Last Champion and the short feature Circle.