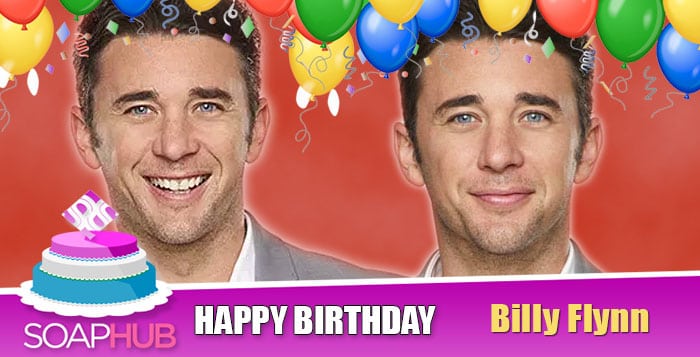 There is always trouble brewing in the DiMera Mansion on Days of our Lives which doesn’t leave Chad much to celebrate – even with his wife safely home – but, luckily, the same can’t be said for his portrayer, Billy Flynn.

That’s because he was born on May 29, 1985, in St. Francis, Minnesota, which means that this talented performer is turning 37 years old today! After working as an analyst for four years, Flynn decided to pursue an acting career.

His first professional job was a commercial for Taco Bell, which was quickly followed by the short film 80 in 10 (in which he played Liret). Subsequent work included a guest spot on Hawaii Five-O (as Nick Spitz) and a role in yet another short film – Solely (as Michael).

In 2014, Flynn was tapped to replace Casey Deidrick in the role of Chad DiMera. He remained on the NBC serial until February 2019 though he has since returned. Flynn has received two Daytime Emmy Award nominations for his efforts – both in the Outstanding Lead Actor category.

Flynn also played Chad in the app series, Chad and Abby In Paris, which featured a storyline separate from Salem where the young DiMeras tried raising their children in Paris for one year before an attack on Abby’s mother brought them home.

Flynn’s other acting credits include Escape Room (as Victor), Dead on Arrival (as Sam Collins), and Willowbrook (as Kyle) – all feature films. He has been married to his long-time partner, Gina Comparetto, since October 1, 2016. The couple are the proud pet parents to two cats: Regan and Bill Purray.

Soap Hub would like to wish Billy Flynn a very happy birthday and you can too by clicking on the Twitter link below. Days of our Lives airs weekdays on NBC. Check your local listings for airtimes.