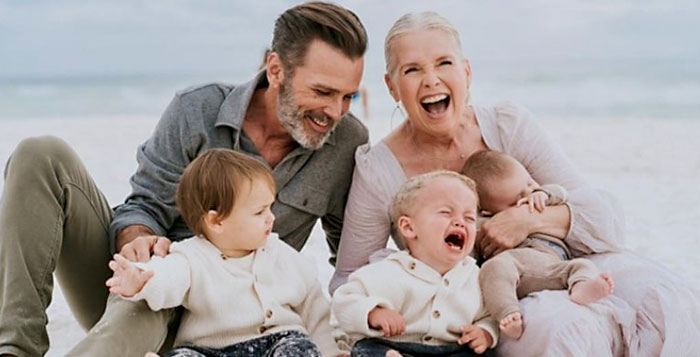 Long-time real-life soap couple Melissa Reeves and Scott Reeves, who first met on Days of our Lives more than 30 years ago, have two children and enjoyed watching their family grow through the years.

In fact, the happy couple shared some news on Valentine’s Day about the Reeves family tree growing even more.

“[M]y funny valentine @scottreevesofficial what an incredible adventure we are on being grandparents—the greatest blessing! thank you Lord🙏 and beyond ecstatic to tell y’all we are getting another grandson in June!!!!!” Melissa Reeves posted. “@twoandyonder are ready for baby boy #2. 4 boys!!!!!! 4 grandsons under 2 years old.”

Reeves posted some adorable family photos taken on the beach with the couple posing with their three grandsons and added a group photo of the entire family, with kids Emily and Larry as well.

Melissa also posted some cute photos of her grandkids in an earlier post over the holiday and was obviously thrilled to be spending time with the little ones. “[T]his was from tonight at our valentine dinner. these two had us laughing all night. what a team,” she wrote.

Melissa Reeves, who has played Jennifer Horton Deveraux on and off since 1985, is currently off the show’s canvas, but her character did stop by during the Christmas holiday to the delight of many fans. With news that her on-screen husband Jack (Matthew Ashford) is heading back to Salem, wouldn’t it be great for Jennifer to say goodbye to Boston and return home to her family?

Scott, best known for playing Ryan on The Young and the Restless and Noel on Nashville, hasn’t been on daytime since his 2009-2013 run as Steven Webber on General Hospital. While fans would love to see both of them back on-screen somewhere — maybe even together — for now, the Reeves seem perfectly happy spending time with their grandkids and family.