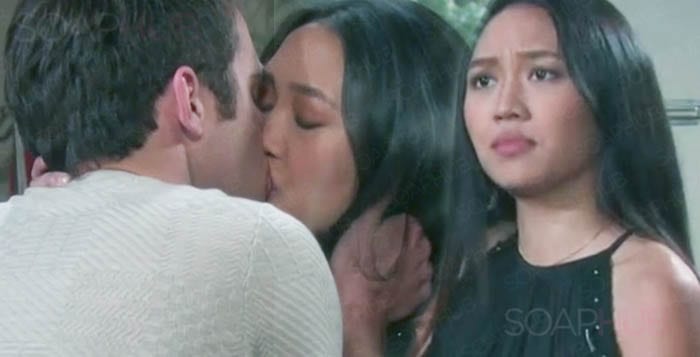 JJ and Haley Days of Our Lives

Days of our Lives fans still don’t have all the details regarding Haley’s death. We’ve pieced together that she was taking care of Brady (Eric Martsolf) and Kristen’s (Stacy Haiduk) newborn daughter and the baby somehow died and a grieving Kristen blamed Haley and killed her.

So we’ve been talking about Haley, and even seeing dead Haley. But do fans miss living, breathing Haley? What almost 4,000 fans said to us:

Come Back To Me

Bring her back alive, 70% of you are demanding. Haley was such a breath of fresh air in Salem! Even if her story was the same old, same old ‘my sister/my mother’ cliche, it was nice to see it played out by an Asian family.

And, yes, the immigration saga had so many holes and errors, it made logic itself weep. But, hey, the writers tried to be current. Let’s give them credit for the attempt.

But the most important thing is that Haley and JJ were sweet together. After being disappointed by Gabi (Camila Banus) and Lani (Sal Stowers), it was nice to see the Deveraux scion smiling again, doing normal young man things, instead of wallowing in self-pity and considering suicide. There went all that progress!

On the other hand, 30% of the audience have paid their respects and moved on. Haley never had… what’s the word we’re looking for… personality. She was a collection of trendy plot points. Which the show pulled off very, very badly.

Maybe if she hadn’t been introduced as a perpetual damsel in distress, fans would have gotten the chance to know and love her. This way, we were constantly expected to feel sorry for her. And you’re exhausted. Days of our Lives (DOOL) airs weekdays on NBC. Check your local listings for airtimes.