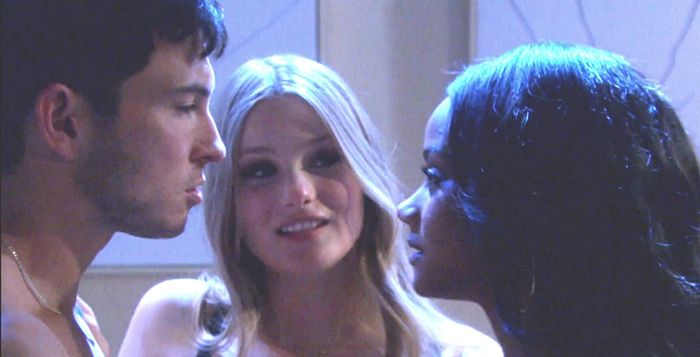 Days of our Lives — A Whole New Streaming World

Of course, for many longtime viewers, the fact that it was a sexcapade that got the soap world some attention isn’t necessarily a welcomed occurrence. But frankly, as everyone fights to keep soaps on the air, anything that can perhaps gain some eyeballs should be explored. Days of our Lives, by virtue of its being on the streaming service Peacock+, is in a unique position to have that ability by pushing boundaries — and the team in charge is obviously up for the challenge.

This sexytime moment was many things, but the culmination of a love story, it was not. Show young folks having a great time, exploring their sexuality. Throuples may be new to daytime (outside of the occasional fantasies over the years), but there was never a pretense that either woman had any feelings for Alex, or he for either of them other than a playboy’s flirtation trying to see what he could get.

This sexual encounter was given the treatment fans would want for a couple we’ve been waiting years to have reunited. That was the part that felt inappropriate — not that it happened at all. All we can say is if Stefan O. DiMera (Brandon Barash) and Gabi Hernandez DiMera (Camila Banus) don’t get as gloriously lit, choreographed, and scored sexy love scene as that, then it really will be a crime.