The Bold and the Beautiful Spoilers (BB): Tempers Flare and Sally Becomes A Target
Share on Facebook The Bold and the Beautiful spoilers (BB) for Thursday, June 28 reveal a day of epic showdowns. Your won’t want to miss a moment of this edge-of-your-seat episode.

Hope Goes Ballistic!
The last few months have been a nightmare for Hope (Annika Noelle) and it’s only going to get worse.

She’s lost her man and now she feels like her fashion line is being threatened too. These are her creations, her designs, and her products and can’t understand why she needs a helping hand, especially from Sally!

Spoilers reveal the two face off and it ends in Hope having a meltdown. Sally’s (Courtney Hope) wild ideas and unconventional designs are in a league of their own and don’t follow her vision whatsoever. She wants the redhead off her team right then and there!

Hope’s not the only one who wants Sally kicked to the curb. Ridge (Thorsten Kaye) doesn’t want this enemy in their midst. Sally’s already proven over and over again she can’t be trusted and he calls out his father over his terrible decision making.

Eric (John McCook) will stand his ground about giving Sally a chance but not until Ridge runs up one side of her and down the other. Poor Sally’s going to get an earful and she’ll have to stand there and take it if she has any hope of staying in the FC fold.

Katie’s Jealousy Shines
Unfortunately, Ridge isn’t her biggest naysayer. Katie (Heather Tom) is also saying a big, huge NOPE to the new hire, but her reasons aren’t for the good of the company.

Katie’s appalled at how fast Wyatt’s (Darin Brooks) moved on and doesn’t want to face his new girlfriend every single day.

Sally’s facing an uphill battle as her enemies are on the rise. She has a lot to prove and not a lot of time to get people on her side. 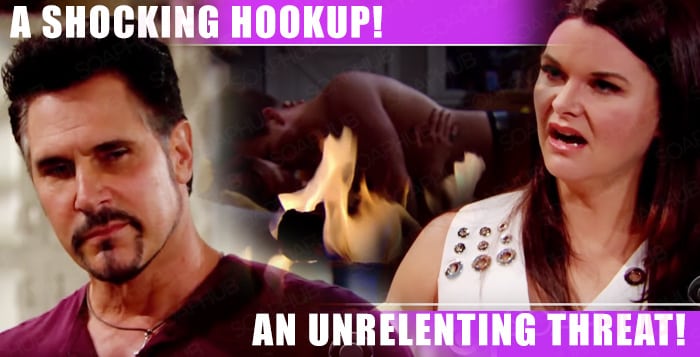