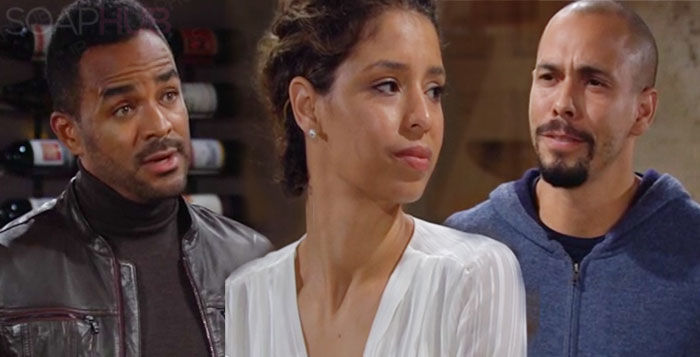 01:38
Who's Your Daddy? Is Elena Pregnant on The Young and the Restless?

Soap fans know what it means when, on The Young and the Restless, Elena slept with two different men within a narrow time frame. One was a guy she used to date. The other was the guy she’s dating now – who she cheated on the original guy with.

Now she has cheated on Guy #2 with Guy #1. So everything should be Even Steven… unless Elena (Brytni Sarpy) gets pregnant. Then we’ll have something else to squabble over. Who should be the father of Elena’s baby? What over 2,000 viewers would like to see:

Back To The Start

Almost half of you, 48%, are rooting for Devon (Bryton James) to win the Who’s the Daddy sweepstakes. Nate (Sean Dominic) slept with Elena while she was living with Devon, so he deserves to steal something back from Nate. People being basically no more than glorified tally marks. Nate won’t want Elena if she’s carrying Devon’s child, so she’ll be punished too!

Plus, Devon lost a child with Hilary (Mishael Morgan), the most perfect woman who ever lived. So the universe owes him one. Elena can just be the surrogate for the baby Devon and Hilary should have had.

Don’t go there, 37% of the audience begs. The story would be so predictable, so cliché… and so boring. Elena is a grown woman. A doctor. If anyone should know how birth control works, it’s her. Let’s assume she’s being smart and careful. As are the two men in her life. Let’s respect them all by not saddling them with this 20th-century story.

Only 15% voted for Nate to be the daddy. He doesn’t have many connections on the canvas, nor has he had as much story as Devon. He’s the new boy in town, so it’s more important to give him something to do. The Young and the Restless (YR) airs weekdays on CBS. Check your local listings for airtimes.