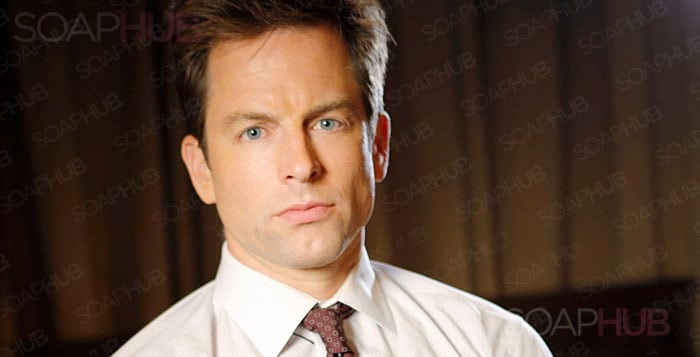 Less than a month ago, Michael Muhney, formerly Adam on The Young and the Restless, reached out to his social media followers, alerting them of a beloved family member who needed some prayers. Now, the actor is sharing an update with his fans on his loved one.

“Ed lost his battle w/COVID,” Muhney posted on Twitter, referring to his stepfather, Ed, who had been ill since last Christmas.” [He was] 56 yrs young. Mom’s soulmate. Extremely involved stepdad & grandpa. A ‘shirt off his back’ human being if there ever was one.”

Muhney shared photos of himself with Ed, including one from last Halloween. “Treated Mom as a Queen every single day for the last 24 years,” the actor added. “We love you, Ed. Forever.”

Muhney received some heartfelt posts of sympathy on his post. “Michael, I am so sorry to hear this,” posted YR and BB longtime fan Matt Hanvey (@matthanvey). “Wish there was something I could say to make a difference; my thoughts are with your mom and your family.”

“I’m so very sorry to hear of the loss of your Step Dad,” added @TweetyBirdCM. “Sending love and comfort to you and your family during this devastating time of loss.

Muhney joined YR back in 2009, taking over the role of Adam from Chris Engen. He played the part until 2014, exiting after a showdown between Adam and Billy (then, Billy Miller; now, Jason Thompson) over Adam’s accidental role in fatally striking Billy’s daughter Delia (Sophie Pollono) with his car. Next, Justin Hartley took on the role and played him for a while before leaving for the primetime show This Is Us. Currently, Mark Grossman plays the part of Victor (Eric Braeden) and the late Hope’s (Signy Coleman) son.

Soap Hub sends sincere condolences to Muhney and his family at this difficult time. The Young and the Restless airs weekdays on CBS. Check local listings for airtimes.

Ed lost his battle w/COVID. 56 yrs young. Mom’s soulmate. Extremely involved stepdad & grandpa. A “shirt off his back” human being if there ever was one.

We love you, Ed. Forever. pic.twitter.com/y1YHVbA2c6