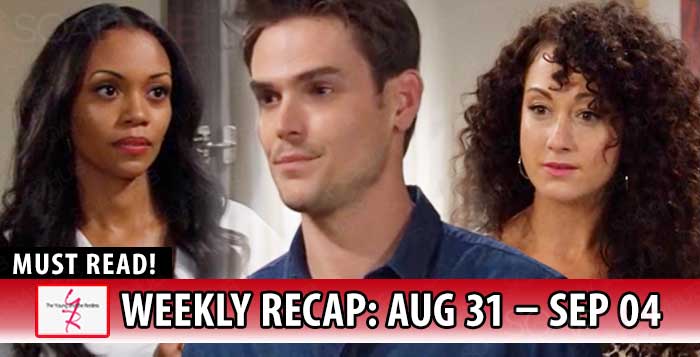 The Young and the Restless Recap September 4 2020

The Young and the Restless recap for August 31-September 4, 2020, features Adam continuing on his downward spiral, Chelsea joining her lover on his trip, Amanda asking a lot of Devon, and an intrepid reporter making waves.

When it comes to the debate on nature vs. nurture, Adam’s (Mark Grossman) pretty sure that nature wins every time. He was a guiltless, remorseless little murderer when he was 11 years old and not much has changed in all the years since.

His desire to tuck tail and run when the going gets tough kicked into overdrive this week – really it’s a default setting – but Sharon (Sharon Case) managed to talk him around.

Chelsea blamed anybody and everybody for her predicament – it’s much easier than admitting that she might not have handled the situation with her husband in the most delicate way possible – and declared that she would no longer allow her child to associate with the notorious Newmans.

Victoria (Amelia Heinle) and Nick (Joshua Morrow) no doubt thanked her for the decision. They’ve got more pressing matters to attend to than raising Adam’s little demon seed. But Victor (Eric Braeden) doesn’t have much to do these days except grouse so he was very, very upset. Might a bitter custody battle be looming over the horizon?

But we may never know. She decided to pass the buck to Devon (Bryton James) and let him decide if she should pursue further inquiries. As if he has the right to deny Amanda her identity.

Once upon a time, not very long ago, Adam and Chance (Donny Boaz) killed a man in Las Vegas. But don’t worry, he was a bad man so it’s all right that he’s dead. Everybody says so – except Alyssa Montalvo (Maria DiDomenico).

She’s apparently sick and tired of her former bestie getting away with murder and it appears she’s making it her life’s mission to ferret out all his misdeeds and bring them out into the light. Just wait until she finds out about Richard Hightower. The Young and the Restless airs weekdays on CBS. Check your local listings for airtimes.