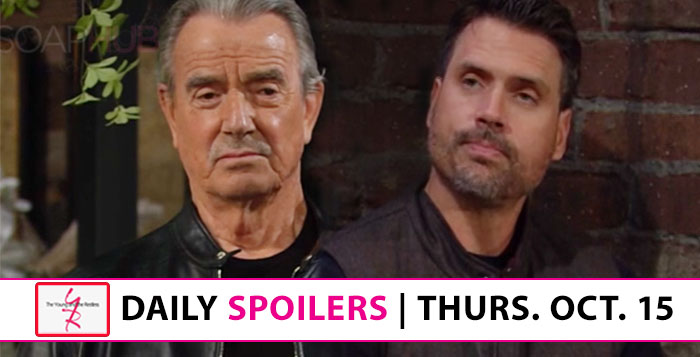 The Young and the Restless spoilers for Thursday, October 15, 2020, reveal Victor continuing to bail out Adam, Nick trying to reconcile Phyllis and Victoria, and Summer hiding out.

Victor (Eric Braeden) is furious at Victoria (Amelia Heinle) for not running the company he gave her (after she blackmailed him into keeping his original promise) exactly the way he’d like her to. On the other hand, Adam (Mark Grossman) literally tried to kill his father, and Victor is bending over backward to make his son happy.

Nikki (Melody Thomas Scott) has gently suggested that perhaps it’s time to cut his losses and get Adam out of all their lives. Nah, Victor is going to double-down and continue to coddle and enable Adam even more!

Phyllis (Michelle Safford) got into major debt. Victoria (Amelia Heinle) bought her debt. Phyllis is mad. Nick (Joshua Morrow) is mad. Nick yelled at his sister. Then he decided there might be a better way.

Nick attempts to make peace between the women. That’s going to be kind of tricky, considering that neither is interested in making nice. Maybe Nick could stay out of it and not try to man-splain business to his girlfriend and his sister.

Summer (Hunter King) is wearing a big, floppy hat. This will make her invisible from Kyle (Michael Mealor). And why does she want to hide from Kyle? Well, as she explained to Faith (Alyvia Alyn Lind), it’s because, after blackmailing Kyle into marrying her, then divorcing Kyle, then sleeping with him while he was still married to Lola (Sasha Calle), then deciding to run off and elope with him, Summer has decided she’s not ready to be married yet.

So rather than telling him her concerns, Summer runs away. And is now lurking about Genoa City, stalking Kyle. Mature… The Young and the Restless (YR) airs weekdays on CBS. Check your local listings for airtimes.