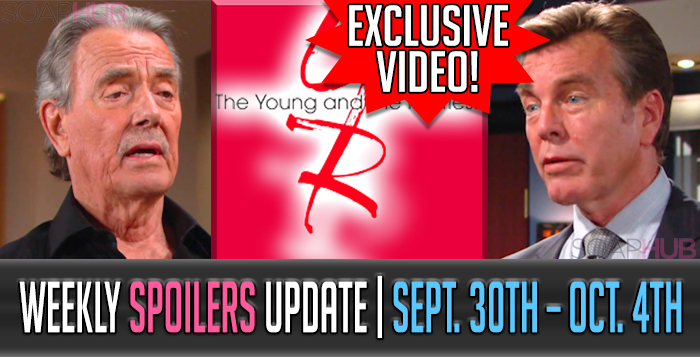 The Young and the Restless spoilers weekly update for September 30 – October 4, 2019, is here! Catch up on what you missed, get a sneak peek at what’s ahead, and see who won Soap Hub’s weekly cash prize! Y&R airs weekdays on CBS. Check your local listings for air times.

The winds started changing on The Young and the Restless this week, and before we knew it, we were caught in the middle of a storm!

Jack had an emotional week, which finally culminated in him approaching Traci with a request to help write the Abbott family history.

Things were even worse for Victoria, who wound up being arrested as the result of Adam’s scheme to offset blame for Victor’s death.

Speaking of Adam, he decided that he was ready to leave Genoa City for good… but a surprise summons to the ranch brought him face to face with his very-much-alive father. Things might seem calmer now, but really, we’re in the eye of the hurricane! Here are the spoilers!

Victor’s confrontation with Adam takes an immediately ominous turn as he reveals his dangerous plan for a showdown. While they square off, Devon has his own dance with Cane, accusing the man of concocting a scheme of his own.

The shake-ups will continue for the Abbott family, too, and worlds will be turned upside down when Jack announces his intention to leave the company forever.