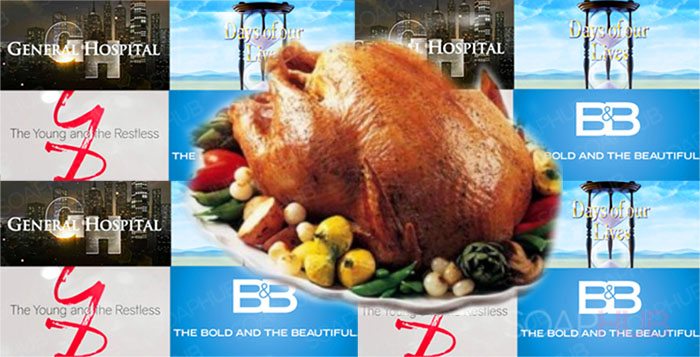 It’s that time of year again, when your soap opera is pre-empted for some turkey-eating and football-watching.

See below for a list of what to expect in all four daytime drama time slots over the next few days.

Days of Our Lives
It’s the annual National Dog Show on Thursday after the Macy’s Thanksgiving Day Parade, so DAYS will not air. It also won’t air on Friday due to NBC covering NHL hockey.

General Hospital
GH is throwing it back all the way to the year 2000 for a very special Thanksgiving encore episode featuring Maurice Benard as Sonny and Sarah Brown as Carly. That’s right, the original Carly will be on your screens.

There will be no GH on Friday at all as ABC airs professional sports.

The Bold and the Beautiful
You won’t see the Forresters vs. the Spencers on Thanksgiving, but you will see the Chicago Bears play the Detroit Lions if you choose to watch.

On Friday, depending on your time zone, you can either catch the CBS Sports Spectacular (Eastern and Central) or NCAA Football (Pacific).

The Young and the Restless
Y&R is pre-empted on Thanksgiving Day for sports coverage, but a brand-new episode will air Friday.

So, if you need your soap fix, you can get it in Genoa City, as it’s the only soap airing that day.