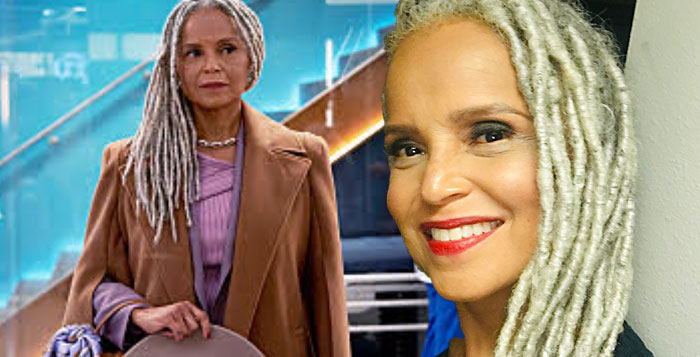 Victoria Rowell is back on CBS. She’s currently appearing in a recurring role on the eye network’s medical drama Good Sam, which stars Sophia Bush as Dr. Sam Griffith, a woman who comes into conflict with her fellow doctor and father Griff, played by Jason Issacs.

Victoria Rowell Has a New Role on Good Sam

Rowell plays the part of Tina Kingsley, and her TV son is played by Edwin Hodge. Fans of Rowell’s from her Daytime Emmy-nominated run as fan-favorite Drucilla Barber Winters can once again see the actress in a CBS drama. She recently chatted with Soap Hub about her exciting new role.

Soap Hub: How did your role on Good Sam come about?
Victoria Rowell: I was on the set of a Christmas movie in Chicago in December. I auditioned on our down time. And I booked it! It was that simple, that and fast. I knew I’d be headed to Toronto [where Good Sam films] after Christmas.

Soap Hub: Tina Kingsley wears hats as do you in real life. Was that touch your input?
Victoria Rowell: (Laughs) Why do you ask? What’s incredible is that there are so many organic instances in this show [that relate to me]. Our costumer, Katy Siracusa, is amazing. She already had hats set out for Tina Kingsley [before I got the role]. I was over the moon with the fashion in Good Sam. It’s fabulous. That was a beautiful happenstance.

Soap Hub: Another bit of irony is your TV son’s name — Malcolm!
Victoria Rowell: This is my second job with a Malcolm as a major character. It’s fun. Edwin Hodge [Malcolm] is a wonderful actor. He’s a pleasure and a treat to work with and off of. All the actors on the show are wonderful — Sophia Bush, Skye P. Marshall [Lex], Evan Parke [Byron]…Jason Issacs…the whole cast is wonderful.

Soap Hub: Tina and Malcolm share an estrangement; any chance of a reconciliation?
Victoria Rowell: I can tell you that in Daytime, I’d get a stack of scripts all at once. But in primetime, I really don’t know what’s going to happen. And I have to say I love that! I know who my character is and who is related to whom. I love watching how all the dynamics will unfold.

Soap Hub: It sounds like you’re having a great time.
Victoria Rowell: I am. It’s great to be back at my home at CBS. This has been my home [for Y&R and also Diagnosis: Murder]. You can hear that in my voice. I have fans who are over the moon based on the response I’ve been getting on social media.

Soap Hub: You also have a holiday movie coming up with Dawnn Lewis (A Different World) that you wrote and directed?
Victoria Rowell: Yes. It stars Dawnn and also Charmin Lee [Doom Patrol]. They play sisters, Corrine and Delores. One grew up in the U.S. and the other in Jamaica. Adam Lazarre-White [ex-Nathan, Y&R] is in it, too. It was great to be reunited with him. I reached out to him and he was so enthusiastic about coming on board. He gives a beautiful performance.

Don’t miss Victoria Rowell, who appears in this week’s episode of Good Sam, which is titled ‘I Thought I Lost You.’ Watch for Sam and Griff to reunite to support Sam’s injured mother Vivian (Wendy Crewson).