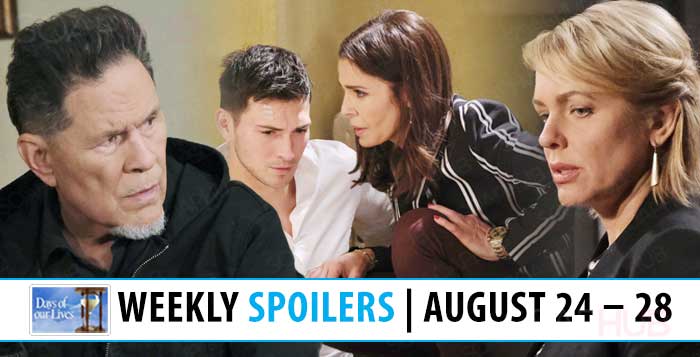 Days of our Lives spoilers for August 24-28, 2020 tease a terrifying encounter for Ciara Brady, a custody hearing that pits brother against sister, and the exit of two fan favorites.

He recalls how he strangled the life out of the young woman, and then he makes a move to attack Ciara! Her love and concern for him allow Ben to briefly regain control, and together, the two uncover the fact that Ben had been subjected to torturous conditioning by Eve (Kassie DePaiva).

Still, even that revelation isn’t enough to quell Ben’s murderous intent. He remains in control of his faculties only long enough to force Ciara into the dorm’s bathroom. He orders her to lock the door… but then starts to break his way in!

Meanwhile, Hope (Kristian Alfonso) and Rafe (Galen Gering) get a tip on Eve’s whereabouts, and they are able to locate and arrest her. Hope manages to learn where Ben left Ciara, but by the time she arrives, her daughter is nowhere to be found… and a disheveled Ben has no idea whether or not he did her great harm.

Nicole (Arianne Zucker) is desperate to ensure that she and Eric (Greg Vaughan) will be named the guardians of Allie’s (Lindsay Arnold) baby, and she’ll use any means at her disposal to seize that victory.

When she overhears Sami (Alison Sweeney) admit to her role in John’s (Drake Hogestyn) collapse, Nicole makes a beeline for Belle (Martha Madison), telling her all that she knows.

In response, Belle drops her sister as a client, leaving Sami with no other choice but to represent herself. Nicole thinks that she and Eric have the case in the bag, especially since they have the letter that Allie penned before her exit. Even so, Sami has a number of aces up her sleeve.

First, she’ll bring up Nicole’s past as a baby-switcher. Then she’ll accuse Nicole of murdering Deimos Kiriakis (Vincent Irizarry)… and threaten to produce corroborating evidence!

Since Nicole is actually guilty of the crime, she’ll be left in a panic… and her troubles will be further compounded when Sami calls Eric to the stand to confirm her claims.

Gabi And Rafe Have Quite The Decision To Make

Jake (Brandon Barash) and Gabi (Camila Banus) share a kiss and wind up making love… a move that doesn’t sit too well with Gwen (Emily O’Brien). She’ll confront her roommate and occasional lover and cause quite the commotion.

Meanwhile, Eduardo (A Martinez) breaks his way into Rafe’s (Galen Gering) abode and shares some disturbing news with his son. It turns out that he’s on the run from some “angry acquaintances” and that they’re on their way to hurt Rafe and Gabi!

Rafe and his father share the news with Gabi, and the Hernandez siblings make the decision to bid Salem adieu… lest they both meet an untimely end. Days of our Lives airs weekdays on NBC. Check your local listings for airtimes.